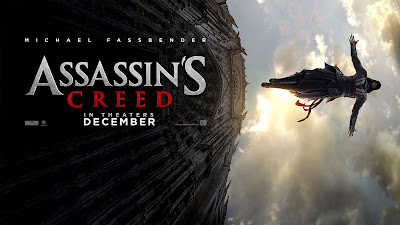 "We work in the dark and disturb the light. We are Assassins."

At one point video game movies must have represented a wealth of potential to both filmmakers and audiences. Studios had a plenitude of source material to pull from and a legion of loyal fans to generate income, while audiences could look forward to their favourite properties being realised on the big screen. But all of that was a long time ago, and by now the stigmatism of unfaithful adaptations, terrible filmmaking and Uwe Boll (which is essentially just a combination of the former two) have made it all the more difficult for films like ‘Assassin’s Creed’.


Convicted criminal Callum Lynch (Michael Fassbender) is rescued from his own execution by Abstergo Industries, the modern-day incarnation of the Templar Order, and learns that they are searching for an ancient artefact. As a descendant a member of a secret order of assassins that for centuries have opposed the Templar Order, Callum is connected to a machine that reconnects him with the consciousness of his ancestor to retrieve said artefact.


I began my review of ‘Warcraft’ (which some had predicted that along with this film would save the video game movie genre, yeah good luck with that) by stating that I had never played or had any interest in the game the film was based upon. The same is true with ‘Assassin’s Creed’, however also like ‘Warcraft’ the film’s director grabs my interest. Justin Kurzel proved with 2015’s ‘Macbeth’ that he is has a talent for epic storytelling and striking visuals. Sadly though, ‘Assassin’s Creed’ has yet another similarity with ‘Warcraft’, that being when all is said and done, it isn’t that good.


‘Assassin’s Creed’ suffers where many video game adaptations do, because filmmakers cannot replicate the hands-on action or intimacy of controlling a character through said action onto the big screen and to compensate for this they either go woefully light on plot or become needlessly expository. Somehow this film manages to achieve both of those at the same time, feeling overwrought and top heavy during its first half, then strikingly underdeveloped during it’s second. It overcomplicated due to how many expositional speeches there are and how much time the filmmakers devote to attempting to make it sound as luridly serious as they can, prioritising it over virtually everything. Then just as the film was nearing its climatic action scene I suddenly asked myself “What have I actually learned here”, at which point I realised I knew nothing about the characters, how they had changed or what they stood to lose. I had no reason to be invested in the action and with that revelation the rest of the film felt as light and as irrelevant as one can be.

Speaking of action though, I often find that underwhelming films can be redeemed in some form with some impressive action sequences. But that is not the case with ‘Assassin’s Creed’, as scenes that are meant to be exciting feel repetitive, predictable and, frankly, boring. Even though I spoke highly of Kurzel earlier, now I have to criticise him, because the direction feels like the sole reason for this. Action scenarios on display here like running across rooftops or a chase on a horse and carriage have been made to look exciting elsewhere, but in ‘Assassin’s Creed’ Kurzel’s reliance on shaky cam, randomly alternating angles and hyperactive editing makes the action feel disorienting. I suspect that there was some impressive stunt work and good use of real props, but the direction never allows us to see that.


Worse still, even the non-action scenes suffer under Kurzel’s direction. Each scene just looks so flat and unengaging, rarely coming to life in the way the filmmakers hoped they would. The futuristic Animus project might as well be the same location as 14th Century Spain as they are both shot in the same uninspired style. It doesn’t even supply any visual eye candy, which is yet another bafflement because despite being such a wondrous combination on Kuzel’s ‘Macbeth’, cinematographer Adam Arkpaw seems unable to render any environment as striking or fully realised. The colours seem bland, the framing seems off and the epic landscapes just come across as obviously fake which in itself is an oddity seeing as they did actually film in Madrid for some scenes.


I cannot think of another film to be released this year that brought together so many talented people only to have them all miss the mark. Yes this does indeed mean that even Michael Fassbender and Marion Cotillard are off as well. Granted the script hardly gives them a lot to work with (particularly for the Oscar winning Cotillard) but in the lead role even Fassbender failed to grab my attention, not even the man who alone managed to elevate ‘X-Men: Apocalypse’ from complete dumpster fire to mildly watchable at times could not engage me here. Even if there is some spark of interest in the likes of Jeremey Irons or Charlotte Rampling they are relegated to the side lines for the most part.


Overwrought and underdeveloped at the same time, the poorly directed and frustratingly bland ‘Assassin’s Creed’ is nothing to get excited for. It also doesn't help that I'm a Monty Python fan and the films keeps mentioning the Spanish Inquisition.