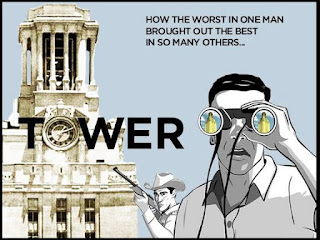 "Everybody was in a state of panic, it was just chaos."

I sometimes wonder if it is even fait to label animation as a singular genre. Of course you have hand drawn and CGI but what I mean is that animation is so versatile in its potential for story telling that it doesn’t seem fair to confine it to a separate, somehow lesser, form of filmmaking. We have seen animation delivered as an existential drama with the likes of ‘Anomalisa’, a coming of age story with ‘Inside Out’ and a harrowing war film in ‘Waltz with Bashir’. With the new film ‘Tower’ is comes as a documentary, and an excellent one at that.


On August 1, 1966, a student rode the elevator to the top floor of the University of Texas Tower and opened fire, holding the campus hostage for 96 minutes. When the gunshots were finally silenced, the toll included 16 dead, three dozen wounded, and a shaken nation left trying to understand what had happened. Archival footage is combined with rotoscopic animation in a dynamic, never-before-seen way to illustrate the action-packed untold stories of the witnesses, heroes and survivors.


Many historical documentaries share a similar visual style. They all try to convey different amounts of information, but given that many filmmakers are so skilled in the method in which they go about presenting that information to an audience, with a range of techniques and tropes regarding how best to do this, inevitably you start to notice recurring traits. However a film like ‘Tower’ is able to reach beyond that for numerous reasons.


Obviously the fact that it is animated plays a large part in that, but it is the way in which that animation is used and deployed in relation to the subject matter. Director Keith Maitland uses the animation to create a distinctive visual style that evokes the first hand emotion concerning the incident as well as the information regarding it. It fleshes out facts in the way that the best documentaries do, adds a face to historical events and realises the real emotions being generated by the real people who lived through it. Despite being unconventional in that the information presented by the documentary is exclusively delivered in the form of interviews with the first hand witnesses of the incident (from the university students, police officers and press on hand).

This method gives the documentary a deeply personal feel. It paints an intimate portrait of a group of people whose lives were forever changed by what they went through that day. It analyses the various actions that transpired from the people’s personal drives and motivations to their overriding memories about the day. As some lay wounded on the college grounds they started reminiscing about their own lives, and the animation chooses to illustrate these aspects as they describe it. When they point out certain details that stick with them the animation will not only display they describe it, but also use particular images and moments as a recurring motif as the story progresses. One of the most striking examples is when a police officer ponders what could have been had he reacted earlier and moved in to stop the shooter, only for the animation to draw attention to an earlier moment of the event in which said officer witnessed a colleague struck down by a gunshot.


That animation in question is strikingly unique. Being more expressionistic than realistic, it lives out the cold, factual truth of that day but is also used to convey emotions and distortions. Certain aspects of life become more apparent as the witnesses describe them, their own perspectives and imaginations are rendered as fully realised pictures. It allows Maitland to tell a suspenseful and harrowing story, one that is keen to draw attention to the acts of heroism and bravery, but also open to capturing the terror of that day. Despite being animated some images feels oddly provocative, like that of a pregnant women, mowed down by gunfire, sprawled on the campus ground, while onlookers are left frustrated at their helplessness and inability to do anything.


Rather than adopting a clinical view of the culture around the shooting, the events leading up to it or the larger ramifications it had on any large institutions, ‘Tower’ remains tightly focussed on the lives of the survivors, and the memories of the casualties. The shooter in question is never even named, while we become intimately familiar of who the witnesses are and how they coped with the event. So while it rarely delves beyond the personal perspectives of the survivors, ‘Tower’ manages to paint a larger picture than just describing a singular event.


As evocative as it is informative, ‘Tower’ is an intimate view of a massive event, rendered in a uniquely stylistic and innovative format.