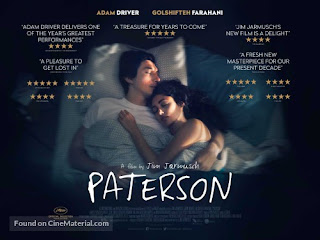 "A bus driver named Paterson. This is very poetic."

It has been a gradual and almost invisible process, but I think Jim Jarmusch has steadily gained my respect and admiration to become one of my favourite modern auteurs. If there was one word I would consistently apply to his style of filmmaking it would be, poetic. Starting with the minimally absurd ‘Stranger than Paradise’ Jarmusch’s career has included such marvellously unique films as ‘Down by Law’, ‘Dead Man’, ‘Broken Flowers’ and ‘Only Lovers Left Alive’. Therefore it shouldn’t come as a big surprise when his latest film, ‘Paterson’ is pure poetry both in subject and method.


A bus driver (Adam Driver) named Paterson goes about his daily routine in the region of Paterson, New York. Paterson gets up early and goes to drive his bus, writing poetry as he listens to the various conversations of his passengers. He then returns home to his loving wife Laura (Golshifteh Farahani), takes their dog for a walk, stops off at the local bar.


Certain movies just feel like they are assembled of contradictions. ‘Paterson’ can be described using many contradictory terms, it is tiny in scale yet grand in its ambition, episodic in structure yet seamlessly flowing, simple by design yet beautifully endearing. ‘Paterson’ is a collection of divine moments, attentive to finding the beauty within details we experience every day. Its simplicity is both what makes it so refreshing and so comfortably reassuring. As we watch this seemingly ordinary life unfold over the course of seven days (with each new day being marked by a title card) we are gradually drawn into his world and come to appreciate it on the same level he does.


The film about a poet, and it tries to gain an insight into his mind by observing his seemingly mundane world in the same way that he does. Spotting the glorious details on the lettering of a matchbox to the interactions of random strangers adds to the richness of each day. But for all these seemingly irreverent details Jarmusch distributes enough hints of duality to further draw the viewer into this slice of life. From the fact that the title character and the setting of the film share the same name, or that the location in question was the birthplace of the poet William Carlos Williams who is later mentioned in the film as Paterson’s favourite writer, whose magnum opus is an epic poem titled, wait for it, Paterson. While it may seem easy to take a cynical approach to Paterson’s appreciation of the mundane Jarmusch’s keen writing that is as existential as it is poignantly humorous is able to paint a remarkably endearing picture without the viewer even realising.


Jarmusch is keen for the viewer to notice the recurring patterns that occur within Paterson’s life. His daily routine are presented in a rhythmic manner. But the movie itself never degrades his routine as dull or unimportant. While there is no great drama or defining plot point, Jarmusch’s writing is able to be both observant and engaging. The dialogue itself assists in this a lot as it is always invigorating and interesting, but even the structure of the film manages to find something to keep the viewer occupied. Daily occurrences arise from what Paterson observes, like a couple breaking up or child reading a poem aloud in his bus. They are moments of graceful clarity that most people would dismiss, but an observer like Paterson revels in them, and for as long as we are part of his world, so do we.

There is a lot to be said about how grounded the film is as well. Try as they might Hollywood won’t convince the world that they are capturing real life when they show us their latest superhero extravaganza. Here, Jarmusch openly celebrates the routines of everyday life. Every conversation and event is crafted to be so refreshingly real that at times the film feels more like a documentary. However Jarmusch’s cinematic knowledge allows him to apply his directorial skills in a subtle manner that can evoke great emotional weight from the images he composes. He is able to render the internal as external, displaying his titular characters inner thoughts and feelings through the subtlest of methods. For all his skill with dialogue, Jarmusch is equally talented at crafting poetry on a visual level as well.


Another aspect that helps though, is the way Jarmusch focusses on his actors. In the lead role Adam Driver delivers a performance of subtle brilliance. He brings forth a character who is so utterly introverted that it’s all the more remarkable just how endearing Paterson is, how charismatic and charming he is in his own quiet way and how brilliantly likable he is. He comes across as being an isolated and unique man but one who is never afraid to be amazed by basic interactions and the comfort of his daily routines. In many ways Driver’s performance is the perfect counterpart for the film as a whole, quietly existential and keenly observant, but also inspiringly poignant when it wants to be and somehow knowing on a deep level.
It still sounds bizarre that I could fall so deeply in love with a film that has such little going on within it. But maybe that is part of Jarmusch's illusion, he slowly draws you in and gradually makes you acutely aware of Paterson's surroundings to the point where you also revel in the details of daily life. I found myself looking forward to seeing Paterson return home to a wife he so clearly loves, I was disappointed when ever present background characters were not in the bar that night for whatever reason and I waited eagerly to hear Paterson's next poem.


‘Paterson’ is a deceptively simple film. Plotless and meaningless at a glance but so wonderfully and delicately constructed that it speaks volumes about whatever you want it to. It is about everything and nothing at the same time.