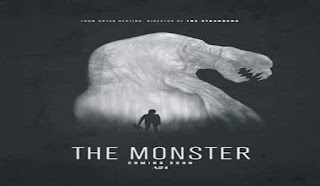 We’ve had such a plenitude of horror films throughout 2016 that by now we have a scale from which to compare these late comers. Does ‘The Monster’ measure up to the masterful dread of ‘The Witch’ or the visceral thrills of ‘Green Room’, will we be tortured with another film as biblically terrible as ‘The Other Side of the Door’ or will it fall somewhere in the middle in the same way ‘The Conjuring 2’ did this summer. Although out of all the horror films of this year, ‘The Monster’ evokes one in particular.


A divorced mother (Zoe Kazan) and her daughter (Ella Ballentine) must make an emergency late-night road trip to see the girl's father. As they drive through deserted country roads on a stormy night, they suddenly have a startling collision that leaves them shaken but not seriously hurt. Their car, however, is dead, and as they try in vain to get help, they come to realize they are not alone. A terrifying evil is lurking in the woods, intent on never letting them leave.


Now to anyone who saw ‘Under the Shadow’ earlier this year, that premise may sound eerily familiar, or at the very least should evoke similar thematic aspects of a mother and daughter in peril from a supernatural entity that seeks to examine the main character’s capability as a mother in the face of both social prejudice and demonic challenges, all set within a confined space that the film rarely strays from. When compared to Babak Anvari’s film (which I won’t do that often because, come on that’s just not fair) ‘The Monster’ is much rougher around the edges both in its style and quality. It evokes the atmosphere of nastier grindhouse horror films rather than a thoughtful character based horror movie. Of course that is not to say it is impossible to blend various styles into a superior whole (with the horror genre being one of the finest at doing just that) but in the case of ‘The Monster’ the tone and general mood of the film sift rather disconcertingly throughout. One minute it presents us with some brutally violent scenes of tension and the next it wants to force us to care about the more intimate aspects of its characters.


While it is not impossible to make such a contrast work ‘The Monster’ can’t quite integrate the two elements in a cohesive manner. When you add a rather obviously illustrated metaphor of the alcoholic mother having to battle some personified entity in the woods to protect her daughter however, the film gains an extra layer of depth that is commendable. It adds some much needed weight to proceedings that could otherwise have been nothing more than a collection of decent hat tips to the video nasties.

However that emotional core is not quite strong enough to anchor the films various elements. It has the feel of being assembled from numerous parts and stitched together somewhat clumsily. The fact that the film makes frequent use of flashbacks to illustrate the characters pasts only adds to the jumbled feel of the movie. Though it’s divided into layers they never cohesively bleed into one another. Instead of learning about our characters as the situation unfolds which would allow the film to retain its efficiently built up tension and heightened awareness, we are forced to observe one flashback after another, defusing the tension of each scene it is inserted into as well as losing the immediacy that ‘The Monster’ had established rather well.


That is in fact one of the strongest aspects of the film. Similarly to his 2008 horror film ‘The Strangers’, director Bryan Bertino is able to display a lot of directorial skill in how he builds tension (if not only to defuse it as the film progresses). He plays with expectations and subverts them rather nicely, and his use of environment and lighting is very commendable. He ensures that the threat remains an ever present but unseen incidence, lurking on the edge of a pitch black forest. The only downside to this is that sooner or later the creature has to reveal itself, and once it does Berthino doesn’t really seem to know what to do with it. It is at this point that the film falls into a streak of repetitiveness that is a disappointing divergence from its strong first half. Though the creature itself is an admirable piece of practical effects, Bethino’s directorial skills suit suggestion much more than the noise chaos he tries to evoke here.


But at the centre of all of this lies Zoe Kazan’s performance, which acts as some much needed connective tissue to tie the project together somewhat. Kazan remains effective by never playing to the allegorical nature of the story, instead simply portraying a mother who wants to reconnect with her child. She plays it with unrestrained commitment and a sense of authenticity that stop the flashbacks depicting the kitchen sink drama from descending into tedious melodrama.


Though it has many strong elements, ‘The Monster’ rarely comes together as a cohesive whole and ultimately feels less effective than other entries of the horror genre from this year alone.