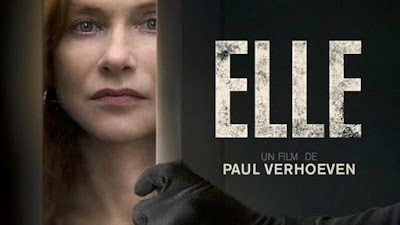 "I don't want this anymore, this situation, the lies."

Paul Veerhoven is what I like to call a filmmaker of extremities. Whatever project he is undertaking he takes it to the furthest extreme in every aspect. Distinguished for his films that tackle sex, violence and any disturbing combination of the two, his time in Hollywood generated iconic science fiction masterworks such as ‘Robocop’, ‘Total Recall’ and ‘Starship Troopers’. His career in Europe also brought forth some equally terrific films from ‘The Fourth Man’ to ‘Black Book’. His latest, ‘Elle’ proves that at 78 years old, he’s not showing any sign of slowing down.


Michèle Leblanc (Isabelle Huppert) is raped in her home by an assailant in a ski mask, then attempts to sweep the incident under the rug and resume her normal life. However as time passes she becomes increasingly suspicious of those around her, and when she discovers the identity of her assailant and begins stalking him back she starts down a dark road of obsession and violence.


So going back to the subject of Veerhoven and his extreme nature, just in case that plot synopsis was not disconcerting enough or did not quite convince you of just how provocative Veerhoven’s filmmaking is, know that ‘Elle’ opens midway through the event that sets the plot in motion. There is no safe introduction to this world, no gradual build up or subtle foreshadowing. Instead we are thrust straight into a scenario of our worst nightmares, one that is rendered before our eyes in the most unapologetic way we could imagine. It takes a filmmaker of true boldness to carft something like that, and in all honesty it is difficult to imagine anyone but Veerhoven daring to walk such a tightrope, let alone succeed and create something truly exhilarating.


Like a lot of Veerhoven’s films there are many ways to read and interpret ‘Elle’. While many have tried to read the film as a statement on gender relations and sexism the main aspect I took away from the film was that it was a complex revision in the dynamics of abuse as well as delicately brutal character study. It examines why we tolerate abuse in a society, why we take so long to heal from it and how projecting abuse onto others can lead to a self-perpetuating cycle that destroys can lives, and even more tragically, define them.


In some ways it reminded me of ‘Nocturnal Animals’, even down to the ways I can imagine others criticising it. Where some have labelled ‘Elle’ a cold and distant movie, I would instantly retort that the titular character is a cold and distant person. In many regards that is where many of the biggest twists and turns of the story are rooted. The way that her plight demands sympathy from everyone, but as Michelle makes continuous efforts to avoid all human contact we are left stunned at her lack of investment in an incident that horrified us into sympathising with her. Without even realising it the movie has goaded us into projecting our empathy onto Michelle, only to confront that very notion as her personal history and complex layers are peeled back as the film progresses.

This thematic undertone is evident by how Veerhoven seems only mildly interested in the actual mystery concerning the identity of Michelle’s attacker. He leaves some fairly obvious clues as to who the perpetrator is and though it may look like he has robbed us of an intriguing mystery, it is obvious that Veerhoven wants to spend more time on the psychology and aftermath of the situation. His camera remains planted on her for the entirety of the film, as if daring the audience to even try and decipher the far more complex mystery of what motivates her. The way ‘Elle’ examines power dynamics and the observations it makes over them are almost disconcerting enough on itself, but when it throws in a group of characters who are written to represent nothing but themselves, makes for a conversation that is so riveting, intelligent and bold that it is almost impossible to look away.


What helps keep you planted to the screen is Isabelle Huppert’s performance, which is a towering feat of transcendent acting the likes of which I have not witnessed in a long time. I was left reminiscent of De Niro in ‘Taxi Driver’ as like that masterwork, Huppert’s performance is utterly profound and humane. But at the same time she never demands our sympathy or affection, she simply presents a flawed and damaged character in all her unapologetic glory. Many actors would be hesitant to play Michelle this way for fear of being disliked, but Huppert does not seem to care, she simply wants to render this anomaly of a human as real flesh and blood. What is even more striking is the sheer range on display, with the ability to be helpless, powerful, manipulative, terrifying and even funny at various points throughout the narrative, but always with an underlying sense of consistency that never makes you doubt that you’re watching the same strong character.


Not fearing what the viewer thinks of you is a trait shared by the film’s director. With his first feature film in ten years one would think that even a filmmaker like Veerhoven would want to ease back into his provocative state of storytelling. But if anything ‘Elle’ represents Veerhoven at his most unrestrained. He’s not subverting a genre or defying our expectations here, he is making a distinct commentary on broader human issues that are as terrifying as they are thrilling. On a technical level his handling of suspense reflects the skill of a true auteur, with an eye of long experience to refine it to perfection, however his ability to grasp human behaviour may be even more compelling. Despite its larger societal implications ‘Elle’ remains focussed as a story of a deeply disturbed person handling the act of abuse. His handling of the subject matter is so visceral that it almost acts as a countermand to anything else Veerhoven has done in his career, with his usual visual stylistics being deliberately absent. However the provocative themes and twisted psychology of it make it a perfect addition to his long career, and quite possibly his best ever dare I say.


‘Elle’ is a masterpiece in every sense of the word, not aiming to please everyone in the audience but instead to reflect the truth at them, however terrible or brutal that truth may be.