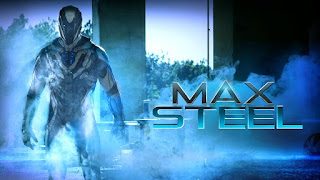 "Your father believed he could save the world, it's up to you now Max."

Just when I thought 2016 didn’t have any terrible movies left to give, particularly at this time of the year when it seems like we are finally being treated to worthwhile films, something like ‘Max Steel’ comes along. I thought I was numb to horrendous films after having witnessed so many big budget atrocities this year, from ‘Gods of Egypt’ to ‘Batman v Superman’ I thought I’d seen it all, but I underestimated the potential to make a film as awful as ‘Max Steel’.


Chronicling the adventures of teenage Max McGrath (Ben Winchell) and his alien companion called Steel, who are symbiotically bonded and utilize a unique form of esoteric energy to become the turbo-charged superhero Max Steel. As these two unlikely friends struggle to accept their oddly connected fates, they begin to uncover unimaginable secrets, working together to find the truth, and fighting the mysterious forces threatening their world.


It is genuinely impressive in this day and age that a studio can take a property based off a successful line of toys, disguise it as a superhero origin story, spend a mere $10 million on the production and advertising costs, and still manage to lose money when the film is actually released. But against all odds ‘Max Steel’ actually accomplished that. Such a fact is surprising right up until I got around to seeing the film itself, at which point the only thing that surprised me now was how a studio managed to spend $10 million on this monstrosity.


Before I go any further I should elaborate that I do understand that ‘Max Steel’ is intended to be a kid’s film (or at least I sincerely hope it is) and that the makers probably knew they were not going to be breaking cinematic ground with this project. But it doesn’t matter what excuses you apply to the film because regardless of your age, genre preferences or expectations ‘Max Steel’ is almost incomprehensible from every conceivable angle. But amid all of this chaos there is never anything remotely redeeming about the film in question, on no stylistic or creative level is there anything worth discussing in a way that suggests in has merit of any kind.


Put it this way, earlier this year I would have gladly recommended ‘Gods of Egypt’ as a terribly awful film that one could watch for its woefully misguided creative choices and hysterically self-serious attitude. ‘Max Steel’ on the other hand is a rare film that succeeds in being so bafflingly awful and yet so creatively bland that there is not a single aspect of the film that redeems it in any way. You can’t even laugh at how terrible this film is because it is so murky and repetitive both in style and story that all you can do is sit back and pray for it to be over quickly.

It is so poorly edited and shot that it almost defies belief. Every action scene is clumsily choreographed and then hacked by the editing until it is unintelligible. They lack tension and excitement due to the woefulness of their direction, so even if one can look past the embarrassing visual effects, unconvincing stunt work and awful choreography, then they still end up being incoherent. The director repeatedly chooses to resort to applying a tight close up on his actor’s faces during the fight sequences so we can see the strain and effort they are exerting, a creative choice which is as disconcerting as it is baffling. The editing even finds a way to ruin the most basic of scenes, with character geography apparently switching at random points throughout conversations as well as horrendously assembled quick cuts that aim to merge to contrasting scenes together but ultimately undercut any chance either sequence had of being remotely effective.


It is difficult to know which aspect of the screenplay is most impressive. The way is shifts tone and focus so disconcertingly that you have to remind yourself what kind of film you are supposed to be watching every five minutes is an amazing feat in itself. But then you also have the scripts insistence on relying so heavily on clichés and predictable traits, or how it finds the flimsiest excuse to move past the character drama so it can shuffle its way to whatever hastily planned set piece the writers have lined up next. The plot holes are too numerous to count and even if I had the time I doubt I could sit through another 92 minutes of listening to the most uninteresting and one dimensional characters imaginable.


None of this is helped by the cast. While I’m willing to cut the actors themselves a little slack given that it is a well-established fact that every other aspect of this film was doomed to fail, they still don’t escape undamaged. In the lead role Ben Winchell fails to even remotely draw me into the plight of the main character or make me believe that he’s an actual human being. His delivery is so bland and lacking in charisma that if the big plot twist of the film was that Max was a robot the whole time I would have believed it. Andy Garcia turns up for some reason, that’s about it.


Uninspired and misguided on every conceivable level, ‘Max Steel’ is a sad attempt to start a franchise that will never happen.