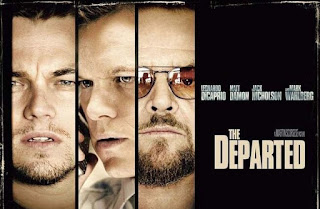 Something that always stands out for me within Martin Scorsese’s ‘The Departed’ is just how intimate it feels. Despite being one of the grandest and most densely populated films of Scorsese’s career it still retains the director’s homed themes of guilt, betrayal and identity, projected onto two strikingly different yet eerily similar characters. In other words on a thematic level it is most definitely a real Scorsese film, on a stylistic level though, it’s another story.


In the city of Boston, Mob boss Frank Costello (Jack Nicholson) plants Colin Sullivan (Matt Damon) as a mole within the Massachusetts State Police. Simultaneously though, the police assign undercover state trooper William Costigan (Leonardo DiCaprio) to infiltrate Costello's crew. When both sides realize the situation, Sullivan and Costigan each attempt to discover the other's identity before their covers are blown.


One commonly known story that accompanies ‘The Departed’ is that Scorsese was only aware that the script was a remake of the Hong Kong crime film ‘Infernal Affairs’ until after he had signed on to direct the script. Unsurprisingly that is quite evident within the film, as Scorsese is not attentive to replicating anyone or using his films as a vehicle for exposition. Scorsese’s use of actors, his themes and simmering energy have always stood out within his films, and ‘The Departed’ is no different.


However, unlike some of his other gangster epics ‘The Departed’ has less flair and style than previous efforts. It somehow feels more grounded and more efficient, and while that may initially seem disappointing as the film unfolds and the stakes continue to rise in the labyrinth of deceit and betrayal, this stylistic choice becomes a powerful asset. Right from the start ‘The Departed’ pulsates with a sense of tension that the viewer struggles to break free from. As the world around Costigan and Sullivan tightens and they are drawn closer and closer to discovering each other’s true identities, the constant reminder that this world is a coldly efficient one makes their dilemma all the more unnerving.

This tone is also felt in the structure of the story. Whereas the likes of ‘GoodFellas’ and ‘Mean Streets’ romanticised the gangster lifestyle before tearing it down in spectacular fashion, here Scorsese throws the viewer right into the deep end. We are acutely aware of the danger this world offers and why these two characters are descending into it. There is also the unrelenting reminder that we are not dealing with men like Henry Hill who are comfortable in the world they inhabit, instead we find ourselves empathising with imposters, men who hide their true identities and must fight to conceal their true nature for every waking hour.


In many ways that is where a lot of the tension of ‘The Departed’ is drawn from, human nature. This knowledge that however skilled and well trained these characters are there is only so long that they can hide their true identities, only so many lies that can be covered up and only so many times they can be pushed before they snap. What is even more terrifying is the alternative that the two men actually fit into their worlds. In a simple moral code we are raised to believe that bad people are only welcomed by bad people, but to see the undercover officer grow attached to his mob family while the mob informant is embraced by the police force draws into question our own moral stance on the subject, and just makes the whole plot all the more complex and intriguing.


Of course, none of this would be as prominent if it were not for the strength of the cast. In what has to be one of the finest ensembles ever assembled in the history of cinema, Scorsese unites three generations worth of first class talent to bring his epic saga to life. Firstly you have Damon and DiCaprio going head to head, each conveying a determined persona who wants to achieve his goal but at the same time bringing forth that sense of conflict that arises when to two sink into their new environments so well. Then the triumphant return of Jack Nicholson who is utterly electrifying as Frank Costello, while one wouldn’t say he was breaking new ground with the performance Nicholson is just so perfect at portraying this kind of charismatic insanity that it is difficult to imagine anyone doing a better job. Throw in Ray Winston as an appropriately intimidating henchman, Martin Sheen as the authoritative Police Captain along with the fantastically magnetic Alec Baldwin and that would be plenty. But then to give us Mark Walberg in one of his best performances that sees him swearing with such vigour and passion that you are unsure whether it’s hilarious or terrifying, then you have a great cast each with their own prefect role. Not only do they shine individually but they fit together in a dynamic so perfectly that it feels like clockwork, perfectly constructed and utterly absorbing.

If there is any flaw to be found with ‘The Departed’ then for me it comes during the third act. But it’s an odd flaw in the sense that I can’t really think of an alternative to remedy it. With so many plotlines to resolve and so many characters arcs to wrap up the pace escalates rapidly to the point where certain revelations start to feel almost humorous. It isn’t detrimental to the film by any means but as ne escalating action piles in top of another it comes across as the script trying to top itself again and again until it can finish. But as I said I can’t think of a way to resolve it short of leaving an unsatisfying conclusion, so while it doesn’t ruin the film by any means it is an issue in my eyes.


Prior to the release of the film some may have wondered why Scorsese had chosen to direct his second remake (with ‘Cape Fear’ being the first). But having watched the film it is easy to see why. Thematically it is intrinsically linked with everything he has worked towards as a director, and with a script so vast Scorsese was allowed to throw all of his skills at it to bring it to life. I for one am very glad he did.


An epic and sprawling saga underpinned by an intimate story of identity, boasting a morally complex plot and a terrific ensemble cast, ‘The Departed’ is yet another masterwork from a legend still at the top of his game.