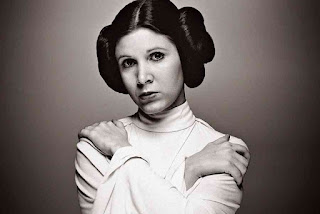 I honestly don’t have much to say here because I still feel like I am in shock. Despite never meeting Carrie Fisher I feel like I have known her for my entire life, as if she was an ever present aspect of my life from my first viewing of ‘Star Wars’ right up to her recent appearances as the franchise has continued to expand. In retrospect I think I can now safely say that the best thing about the recent resurgence of the beloved franchise from a galaxy far, far away is how it gave us the opportunity to remind ourselves of what a wonderful, remarkable and utterly unique person Carrie Fisher was.


I’ve juggled this thought before as we have lost so many beloved icons in 2016, from David Bowie Ronnie Corbett to Alan Rickman and Mohamed Ali. Certain people can leave an indefinite impact on your life and shape who you are without ever actually meeting you. It may be the reason why our culture gravitates towards the concept of celebrity, we strive to find people who we can admire and envision ourselves as so as to confirm that anything is possible. We identify with them to such an extent that when they pass, a small part of us seems to die with them. That is not to say that we have worshipped or fanatically devoted ourselves to that person. But when they played such a huge part in shaping our identity, and when we have spent so many years admiring them for their accomplishments it can be difficult to confront the notion that they are now gone, and always will be whenever we admire them in the future.


Now I am more than ready to acknowledge and celebrate Carrie Fisher’s various other accomplishments, such as her towering personality, impeccable comedic skills, inspirational openness or her sharp wit. You have her talents as a screenwriter, novelist and actress outside of the space opera, but by being in a film like ‘Star Wars’ Carrie Fisher made a claim to have grown up with millions of people across the world, including myself. For many she left an indelible impression and defined part of who they are. Few people have a claim to such a thing, to touch and reach so many lives through a single character.


What a character is was though. One that is an icon in every sense of the word. I’ve spoken before about how remarkable it is that people who have never even seen a ‘Star Wars’ film can still name dozens of characters, quotes and iconography from it without fault. In her performance as Princess Leia Fisher created an icon that almost transcends the medium from which it was delivered. As the woman herself put it “After 1977 Carrie Fisher didn’t exist anymore, I was just a person who looked like Princess Leia”.


Of course this all sounds as if Fisher was resentful of the role but throughout her life she never came across that way. She revelled in her role and was continually grateful for what it had done for her, as well as the legions of fans who continued to praise her work. But what made Fisher so remarkable was the wonderful way that she never failed to acknowledge the absurdity of her life, both personal and professional. It was part of what made her such a strong person, she had the ability to recognise her flaws as well as her assets, and she used that as a voice through which to speak to millions of people across the globe. Whether she was leading a rebellion in a galaxy far, far away or encouraging people to be proud of who they were outside of the big screen. At the end of the day all I can really say is thanks for everything Carrie Fisher, even though I never met you I make no hesitations in saying I knew you and I’m so very glad I, and millions of others, did.
Posted by Joshua Price at 16:48