"Fun isn't something one considers when balancing the universe. But this does put a smile on my face."

Here we are, over the course of 18 movies Marvel have slowly shaped our entire cinematic landscape and redefined the way we think of franchises, all leading up to this moment. It is safe to say that this kind of film is unprecedented in cinema history. No other studio has succeeded in carrying out a sustained narrative over the course of as many movies as Marvel, all with the intent to draw audiences in via the same route comics readers would get attached to different names and titles. So this is it.

When the universe is threatened by Thanos (Josh Brolin), a power crazed totalitarian seeking to unite all six infinity stones and use them to wreak havoc on the cosmos, the Avengers must unite from across realms and planets to face their biggest and most dangerous threat so far.

I’m almost unsure of how to even measure this kind of movie. Do I see it as the culmination of all of its 18 predecessors? Is it the epitome of blockbuster entertainment as we know it? All I know for sure is that it is far from merely a regular movie, or even a regular Marvel movie for that matter. ‘Avengers: Infinity War’ has a kind of built in audience appeal that could only come about from a full decade of slowly gaining a loyal audience who have placed firm trust in the creators and their ability to entertain and marvel (pun intended).

Obviously the film is crowded, somewhat convoluted and gigantic in scale, but that was always going to be a given. Where ‘Avengers: Infinity War’ triumphs is how it so fundamentally understands how its audience relate to and care about the characters who occupy the story. It effortlessly endears you to its characters, fleshes out the stakes and sense of dramatic consequence that will befall them should they fail in their mission, then it just lets the stunning spectacle say the rest. Make no mistake, even if this were empty spectacle (which it is not) I would argue that it would still make for the price of a ticket. 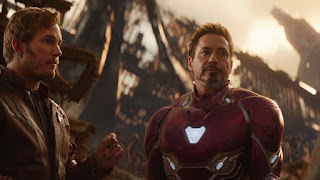 The Russo Brothers have displayed an acute blend of style and personality, as far back as their time directing ‘Community’. Their filmmaking renders the most enormous of set pieces as personal affairs  which retain a key focal point in how they zero in on the characters at the heart of the action. Their camera never gets lost amid all of the chaos and they seem consistently interested in what the heroes themselves are going through, both physically and emotionally. There is a kinetic energy to how they compose an action sequence, giving every super powered punch a sense of visceral impact.

While the narrative essentially boils down to a somewhat simple premise (bad guy wants to do bad stuff, good guys try to stop bad stuff), it’s the dynamic between the ensemble cast of characters that bestows the film’s story with a unique involvement to it. The characters emotional arcs are what underpin the action and intergalactic conflicts, and those arcs are always presented in a way that feels natural to the script. There’s no point where the movie outright halts the flow of the story to tell us how the characters are feeling, instead splicing their progression with the unfolding plot whilst making the action integral to their development.

The script also strikes an excellent balance of tone. There are some truly heavy themes and consequences within ‘Avengers: Infinity War’ but the film never descends too deeply into this grim undertone so as not to lose the attention of its core audience. There is still plenty of character driven humour and cathartically heroic moments that make the whole spectacle thoroughly entertaining. But watch out for some striking gut punches that might make even the most casual viewer well up slightly. I also have to give huge credit to Alan Silvestri, whose musical score is so sweeping and epic that it never fails to convey the utter grandeur of every trial these heroes undergo.

But even with all of these elements at play, it would have been shockingly easy for ‘Avengers: Infinity War’ to become a parade of non-sequiturs. What ties these unfolding events together is Thanos himself, the movie’s main antagonist whose journey to accomplish his goal is phenomenal. There’s a school of thought that the best villains are ones who sincerely believe themselves to be the heroes and that is absolutely true of Thanos. His motivations are not sympatric necessarily but they are based in rationale, and due to the script strongly establishing what kind of person he is the viewer has no trouble understanding why his specific attitude would lead him to the conclusions he reaches. His progression over the course of the movie creates a thematic undertone that really ties all of the events and characters together.

Josh Brolin’s performance is also outstanding, possessing such an air of menace that Thanos always feels like a prevalent threat to our protagonists. But at the same time Brolin crafts several intimate character details through his performance that paint a hauntingly complex portrait. Other fantastic performances include Chris Hemsowrth once again embodying the godlike tendencies that ground Thor as a completely believable presence. The usually charismatic Robert Downey Jr portrays a much more concerned Tony Stark, as if even he is aware of the gravitas concerning what is about to happen. Elizabeth Olson is also brilliant for reasons I won’t dare spoil, adding a large amount of emotional resonance to the third act. 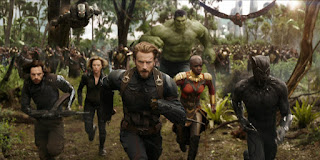 But Marvel have placed their trust in so many talented actors that it should come as no surprise that every major player within the film brings their best effort. No one is phoning it in or merely confident in their own assurance. They all re-establish the characters via their performances, embody who those characters are and proceed to react within the story in such a way that they instil great weight into the script just by being a noticeable presence. Seeing these heroes on screen together is one thing, but to have them feel like real fleshed out characters with their own emotional drives and consequences, well that’s something that has only ever been achieved here.

Spectacular on a level that will satisfy any fan of the MCU, ‘Avengers: Infinity War’ is truly the culmination of a full decade of blockbuster filmmaking. It’s going to be an agonising year until the next instalment.