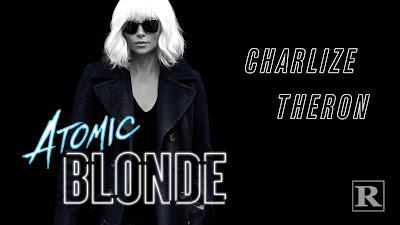 "I chose this life, and some day it's going to get me killed. But not today."

While I was initially disappointed to learn that the directing duo behind 2014’s spectacular ‘John Wick’ were going their separate ways, their solo ventures have not exactly been lacking. Chad Stahelski continued to work within the world he had created with the brilliant ‘John Wick: Chapter 2’ and David Leitch was quickly signed onto direct the sequel to a little movie known as ‘Deadpool’. But before that, Leitch is also helming this action spy thriller, led by Charlize Theron.


In 1989, on the eve of the collapse of the Berlin Wall, MI6 agent Lorraine Broughton (Charlize Theron) is dispatched to the German city in search of a stolen list containing the i8dentities of a number of undercover operatives as well as being tasked with assassinating a double agent known only as Satchel. But to do so she will have to navigate swarms of KGB agents, a labyrinth of unknown loyalties and her eccentric contact David Percival (James McAvoy).


If Charlize Theron does end up going the same way as Tom Cruise (in that after a number of dramatic roles the actor finds a career boost in the action genre) as a result of her frankly astonishing turn in ‘Mad Max: Fury Road’ then I can safely say that filmmakers have made a good choice in terms of crafting the next action superstar. Her performance in ‘Atomic Blonde’ is a testament to her unique abilities as an actor that make her perfect for this genre. She possesses an icy steeliness that makes her presence highly intimidating but also just enough human qualities for the audience to latch onto the more empathetic side of her character. ‘Atomic Blonde’ actually contains more dramatic heft than one would originally assume but Theron takes it in her stride just as well as she does with the ass-kicking scenes.


But despite Theron’s huge presence the rest of the cast are all able to keep up with her. James McAvoy in particular stands out as a temperamental supporting character whose motives remain shrouded in eccentricity, meaning that when the movie brings forward the idea of betrayal and loyalties, everyone is a suspect. The same can be said for Sofia Boutella as a naïve French agent that becomes romantically involved with Theron’s character. I would be lying if I said that this aspect of ‘Atomic Blonde’ felt integral to the movie but it did add to its emotional impact (if only slightly) and it’s also a pleasant surprise to see a relationship of this kind play out in a way that doesn’t try to make it a big deal, especially in this genre.


The fact that the movie is set in the midst of the Cold War also adds a lot. Not only does the narrative make full use of this unique era of history both in terms of set pieces and overall story structure, but Leitch clearly wants to make full use of his late 1980s vibes. The neon lighting distinct colour palette give the movie a rich look that sets it apart from any other modern action movie on a stylistic level. If anything the bright lights of a more laid back scene only serve to make the more brutal action at the centre of the movie more impactful due to their contrast. 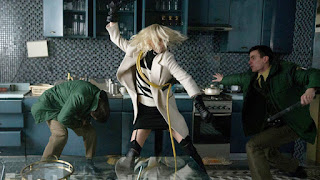 At the end of the day, it is that action which stands as the crowning achievement of ‘Atomic Blonde’. Each new sequence is not only brilliantly creative but also unique in its stylistic rendering. From a moving car, to an overlaying balcony and an abandoned cinema, they action is always captivating and always innovative. Incidentally, any action scene that includes heavy references to Andrei Tarkovsky is something I can respect. But the best of all these sequences is undoubtedly one that takes place in the movie’s third act. It’s performed with choreography that could rival ‘The Raid’ but executed in one glorious long take that would make John Woo proud. Not only that but the action itself is relentless and raw in how it unfolds. Bad guys do not go down with one punch and the protagonist stays far from unharmed, the longer Theron fights on the more fatigue begins to weigh on her and then even after the action is over she sports the injuries from it for the rest of the movie as its entire time frame takes place over just 13 days.


The only major issue to be found within ‘Atomic Blonde’ is the narrative that has to support said action. The plot about espionage and betrayal somehow feels both underwritten and convoluted at the same time, with too many red herrings and repetitive plot points to feel wholly engaging. Of course, ‘John Wick’ did not have what you could call an intricate narrative, but the movie itself knew that the plot was just a frame from which to hang action sequences from and therefore never drew much attention to it. ‘Atomic Blonde’ though keeps re-visiting it as if it expects the audience to be invested in it when I could not say I was. But as soon as the action started again I had little else to worry about.


What it lacks in writing, ‘Atomic Blonde’ makes up for in terms of its stylish direction, strong lead performance from Theron and staggeringly brilliant action scenes.