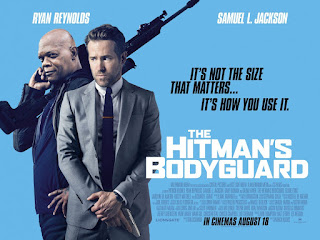 "This guy singlehandedly ruined the word 'mother-fucker' for me."

No summer movie season is complete without that harmless, disposable, perfectly fun but not mind blowing comedy that promises a good time and nothing more. If that wasn’t enough of an indication as to where this review was going then I can further clarify in saying that ‘The Hitman’s Bodyguard’ is basically everything you would expect to see from a film about Ryan Reynolds and Sam Jackson crossing paths, no one is stretching themselves but no one’s being lazy either.


The world's top protection agent (Ryan Reynolds) is called upon to guard the life of his mortal enemy, one of the world's most notorious hit men (Samuel L Jackson). During their journey from England to The Hague, they encounter high-speed car chases, outlandish boat escapades and a merciless Eastern European dictator (Gary Oldman) who is out for blood.


It may sound demeaning to say that ‘The Hitman’s Bodyguard’ is never as funny as its theatrical poster (which is, for the record, hilarious) but in this case the movie offers a perfectly enjoyable summer comedy that, if anything, is only seriously hampered by the fact that it’s hitting theatres ten years too late. Had this exact script been produced in the early 2000s or late 1990s it would have been a smash hit, but now it’s more of a guilty pleasure to throw on when there’s nothing better to do.


That being said, being released now is the perfect time for the movie to capitalise on the popularity of its two leading stars as Reynolds and Jackson are both enjoying superhero aided career boosts. Their chemistry is far and away the strongest aspect of the movie and never fails to prop it up when it falls upon weak or clichéd writing. At times I think even the movie is acutely aware of this fact as it never strays away from the duo for too long. Even it’s scenes of exposition feel like they are in a rsuh to be over and done with so our attention can return to the reason we are all here in the first place. 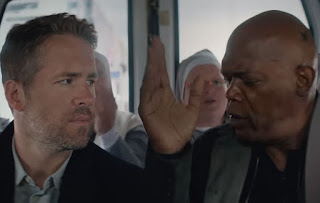 As I said at the beginning, neither actor goes above or beyond what we have seen from them in the past but they are so well practiced at playing their respective personalities to a fault that it’s hard to be too critical. Jackson is in the quintessential menacing yet charismatic badass whilst Reynolds plays the smart mouth counterpart. They play off of one another very well and seem to be locked in a battle for more engaging screen presence that never feels overwhelming. As a duo they’re not at the amazing levels of, say, Gosling and Crowe in ‘The Nice Guys’ but it’s good. Having just said that I’m now wishing this movie had been written and directed by Shane Black instead and now I’m sad at a lost opportunity.


If it sounds like I’m running out of things to say it’s because I am. Ask yourself what your bare minimum of expectation was for this movie and I can guarantee it will deliver that. I suppose it’s biggest flaw is just how generic the writing feels. There’s no innovation or surprise to the plot, nothing to really draw us into these unfolding events. It is purely an exercise in having adding an obligatory plot to a comedy movie because it needed to have one. ‘The Hitman’s Bodyguard’ never even tries to turn its narrative into anything else, which would be fine if the movie itself didn’t stake so much on it. When the third act rolls around the movie likes to pretend that we as an audience are somehow invested in these characters and intrigues by this plot when in actuality I think you would struggle to find anyone that genuinely was.


Still, it’s made a little better by the fact that the villain of the piece is the ever magnetic Gary Oldman. Once again it’s a case of an actor never reaching beyond what they have already proven themselves to be capable of many times over, but Oldman’s over the top presence is always welcome. In the movie could learn a bit by leaning more heavily into that over the top sensibility. ‘The Hitman’s Bodyguard’ is at its funniest when it throws all rules of logic and out of the window. Its action scenes feel more like a Saturday morning cartoon and it’s hugely entertaining. It’s all competently directed by Patrick Hughes, who (like every other solitary element of this movie) isn’t pushing his limits but is staying comfortably in the field he’s good at. So I feel like a looser attitude to proceedings would not go amiss. After all, we were never really invested in the intricacies of the narrative anyway, so why bother adhering to the same principles with the action scenes?