"You were born to change the world, not just add to the noise."

Given that one of my favourite films of 2013 was Destin Daniel Cretton’s ‘Short Term 12’, a movie that featured a brilliant combination of emotions of both the sincere and honestly raw kind. It was a movie that never felt manipulative or contrived in what it was asking its audience to feel, coming across as a drama that was heavily rooted in realism. Cretton’s next feature, ‘The Glass Castle’ is everything his previous film knew better than to be.


Based on a memoir, four siblings must learn to take care of themselves as their responsibility-averse, free-spirit parents both inspire and inhibit them. When sober, the children's brilliant and charismatic father captured their imagination, teaching them physics, geology, and how to embrace life fearlessly. But when he drank, he was dishonest and destructive. Meanwhile, their mother abhorred the idea of domesticity and didn't want to take on the work of raising a family.


I should start by saying that there is nothing inherently incompetent about ‘The Glass Castle’, but at the same time there is nothing remotely memorable about it either. As I said at the start, ‘Short Term 12’ never felt like it was resorting to contrived melodrama or emotional manipulation but this movie does. It’s far from the worst sin a film can commit but it can certainly ruin the experience for someone who was hoping to watch something that felt like it respected their ability to emote naturally a bit more.


It’s amazing that I can feel that way about a movie starring Brie Larson, an actress whose ability to convey the rawest of emotional honesty makes any project with her name attached to it intriguing from the off.  She is performance is sometimes compelling but never feels engaging enough to make up for the movies own shortcomings. The same goes for also of the cast in that they were certainly good but never quite disappeared into their performances, which is surprising given that it’s a cast that includes the likes of Woody Harrelson and Naomi Watts. That might be due to the weakness of the screenplay, which fails to make its characters feel involved in the story that they are a part of.


The film is also very awkwardly paced and structured. Its flashbacks feel infinitely more interesting than the story taking place in present day (a feat that’s actually kind of impressive given how that’s the part of the movie that features Larson). The movie clearly wants to try and draw a meaningful connection between these two time frames and highlight how one is influencing another. But it resorts to doing so by using a distracting and emotionally hollow score, elements that simply ring false when and in conflict with the rest of the movie. It wants to present itself as an honest portrayal but doesn’t even let its audience reach a place of emotional release naturally. 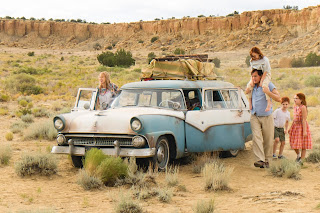 The other unfortunate result of this is that the film gives the impression that it was too afraid to take an honest approach. It risks feeling like something that only half commits to its original vision and has decided to manipulate the audience into seeing the lighter side of the story in favour of the more brutal aspects. Tragedy seems to punctuate almost every aspect of this story, yet the film only seems content in letting the audience feel its presence half of the time. For the rest of the film it has to generate contrived resonance. It robs the story of so much potential complexity as well as never letting the actors explore of more meaningful side of the characters they are portraying.


Cretton’s approach to directing the movie also falls frustratingly flat. Whereas ‘Short Term 12’ utilised hand held cameras and a few stylistic touches that heightened the harsh realities of the story, ‘The Glass Castle’ never takes any steps to draw the audience further into this story on a directorial level. None of the images feel exceptionally compelling or provocative, none of the stylistic choices feel inspired. It’s an understated approach but the structure and nature of this story make it inherently subjective. Cretton’s approach makes it feel cold and distant, never creating a sense of intimacy or empathy.


In short, ‘The Glass Castle’ feels like any other traditional Hollywood drama. I don’t doubt that some audiences will be able to become invested within the drama of the film, but from my perspective it felt contrived and hollow. None of the emotional beats of the movie felt authentic and tonally confused. Rather than dig into the complexities of the story it presents a sanitised order of events that is bitterly disappointing from the likes of Larson and Cretton, whose authenticity has always been one of the strongest aspects of their work.


Despite being competently made, ‘The Glass Castle’ never reaches beyond its contrived melodrama to become anything more meaningful.