"It's coming after me, an evil presence, because it knows I'm the weakest."

So, a prequel to a spin off about a series of horror movies I already thought were grossly overrated. Don’t get me wrong, I like ‘The Conjuring’ as well as its sequel, they’re both perfectly fine horror movies but to see to them praised as being amongst the greatest horror films of all time is frustrating for me given that I find them to be a collection of horror homages that, despite being well done, are things I have seen done better in a dozen different movies before them. The less said about the truly awful ‘Annabelle’ the better, however this prequel is, believe it or not, surprisingly decent.


Former toy maker Sam Mullins and his wife, Esther, are happy to welcome a nun and six orphaned girls into their California farmhouse. Years earlier, the couple's 7-year-old daughter Annabelle died in a tragic car accident. Terror soon strikes when one child sneaks into a forbidden room and finds a seemingly innocent doll that appears to have a life of its own.


Now, before we get ahead of ourselves, I still think ‘Anabelle: Creation’ is of similar quality to ‘The Conjuring’ movies due to leaning a bit too heavily on established horror clichés and not offering up much in the wake of new or innovative ideas as well as being very one dimensional in how it treats its characters. That being said, the craftsmanship behind the movie makes for an effectively chilling horror film that is surprisingly well made, especially considering that its namesake was one of the worst films of 2014.


Another surprising element is how the movie plays more into the psychological aspects of horror than the supernatural. It unfolds quietly and patiently, carefully revealing itself in one escalating set piece at a time so not to leave the audience spent out before it reaches the climax of the film. As he proved with his directorial debut last year ‘Lights Out’ (which was good if not never quite as effective as the short horror film upon which it was based…which he also directed) David Sandberg can craft a highly atmospheric horror sequence with a very simple ground plan. Annabelle as an object of horror does not move, it is merely a prop to represent the demonic presences in the house and the movie seems to know that. It plays with the creeping dread and anticipation that is thrust upon a character just for discovering the cursed doll and then seeks to play with the audience expectations over what precisely will happen next. 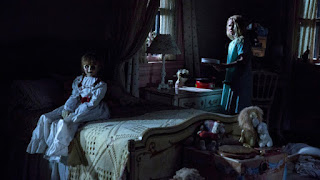 While the environment of the film is nothing new, a house in the middle of nowhere complete with secret passages and forbidden rooms, the dynamic of the characters that populate it is. By making all of the major characters young girls Sandberg’s film not only offers a fresh perspective on this genre type but also allows our suspension of disbelief over some of the more ludicrous character decisions in the movie to make sense. Granted, I can’t actually confirm whether or not young orphaned girls would act any more rationally than a group of teenagers/adults when faced with a demonically possessed doll but in the world of the movie’s narrative it allows us to excuse the less logical decisions made by said characters. As well as that, Sandberg adds specific details to his characters that further excuse any potential plot holes. With one character being confined to a wheel chair (someone saw ‘Texas Chainsaw Massacre’ didn’t they?), simply turning and running away is no longer a viable option.


None of the characters are deep but they fill out their purpose with efficiency. They are all sympathetic enough so that the audience can root for them to survive the ordeal and we are treated to some very good performances from this young cast as well. They each distinguish themselves enough to be recognizable and carry their own characteristics that prevent the ensemble merging into either one faceless entity or a collection of character clichés.
Going back to my initial statements on the characters though, same could be said of the plot, which despite being generic and lacking in any meaningful substance, serves its purpose to a degree that feels almost self-aware. ‘Anabelle: Creation’ uses its plot purely as a means to hang some effectively scary horror set pieces from and on that front the movie achieves this very well. While some horror fans may be disappointed by the slower pace of the movie’s first act, I felt that it built very patiently and deliberately in order to deliver the scares later down the road. It lends itself to a tight pacing and structure that means the movie has a very well defined outline as well as clearly distinguishable build ups and pay offs. This may sound like a basic rule but with the horror genre in the current state it is, it’s refreshing to see these steps undertaken so confidently and efficiently.


Though there’s nothing particularly fantastic within it, ‘Annabelle: Creation’ is an effectively scary horror flick that is certain to please fans of the genre.