I hate to say it but I feel at this point live action adaptations of anime have become just as stigmatised as video game movies. Granted not all of them are terrible but I think we can unanimously agree that we have yet to see the definitive adaptation that will convince the rest of the world that they have merit. From the unspeakable awfulness of ‘The Last Airbender’ and ‘Dragonball: Evolution’ to the decidedly meh entries of ‘Ghost in the Shell’ and the projects that have potential but have spent an eternity trapped in development hell like ‘Akira’.

A high school student comes across a supernatural notebook and soon realises that it holds a great power within it. If the owner inscribes someone's name into it while picturing their face, he or she will die. Intoxicated with his new godlike abilities, the young man begins to kill those he deems unworthy of life.

I won’t pretend to have seen the anime of ‘Death Note’ but it’s praised by enough people I trust that I can assume it is a worthwhile watch. But the premise alone made me think that Adam Wingard was a suitable choice of director for the project. Wingard’s understanding of simple yet effective scares as well his ability to subvert genre tropes would make him a prime candidate to helm a project that would seem unlikely to work on first glance. But where Wingard’s instead of subversion and efficiency, ‘Death Note’ feels tonally confused, generic and about as conventional as they come.

On the subject of what I was saying earlier, ‘Death Note’ most definitely falls within the “meh” category of anime adaptations as there is nothing abysmal about the movie, but at the same time there is nothing particularly memorable about it either. The only thing I can praise is Willem Dafoe’s performance as Ryuk, the demonic god of death that appears to the protagonist when he receives the fateful book. Dafoe evokes a great sense of presence and adds a wonderfully engaging menace to proceedings.

However the rest of the movie is comprised of either a series of clichés or creative decisions that are frankly baffling, not terrible but just baffling. As opposed to a slow build of tension that would seem more suited to the movie (since the act of writing someone’s name in a book isn’t immediately exciting) Wingard populates his film with an overly energetic sensibility. He employs smash zooms, jump cuts and transitions that would feel more at home in an Edgar Wright movie. It feels so mismatched to the feeling of dread that the movie seems to want the audience to feel that it acts as more of a distraction. 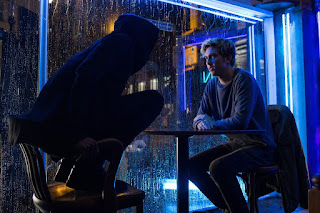 I hate to say this as well but on one occasion, these stylistic choices combined with another element of the movie to make it feel unintentionally hilarious at times. Moments of high tension are undercut not just by the directorial decisions but also by some wildly over acting. The characters seem to react to every situation in a way that no normal human being would. I understand that most people don’t encounter a demonic god of death every day, but those characters should at least be empathetic or well written to a point where the audience can understand their outlook on the world as well as recognise their consistent traits. None of the characters in ‘Death Note’ have any of that, they just feel like the same bland, generic teenage characters that would populate any high school soap opera.

While I can commend his cinematography it is very much a case of style over substance as so little effort seems to have been given to the important aspects that would keep us invested in the movie. There is no nuance to the way the characters act, no intrigue into what was happening or urgency to the events as they played out. Not only does the screenplay seem to fastback any sense of gradual character development. There’s never really a new scene that feels necessary to the characters, it just feels like it’s been placed there as an obligation more than anything else. It constantly made me wonder not only why that scene was where it was, but this movie even existed at all.

Far be it from me to criticise the gore of a horror movie, but the deaths and bloodshed of ‘Death Note’ just feel completely out of place with the movie around it. Once again it comes down to tonal consistency as her we have a movie asking its audience to treat it as a serious drama, but as well as not putting any effort into making us empathise with the characters or their situation, inserts a moment of violence that would feel more in place in ‘Evil Dead 2’ than this supposedly patient and methodical tale of morality.

‘Death Note’ lacks the nuance, atmosphere, character development and basically any other solitary aspect would make this story interesting.