"You are the coolest, most interesting person I've ever met."

It’s always difficult for movies to pin point current culture, mainly due to the fact that from the inception of the movie to the actual production, whatever aspect of popular culture your script was based upon has likely faded into obscurity. It’s even more difficult in the digital age when entire sub-cultures can rise and fall within the space of a week (good luck to the poor person who made a movie about Vine), so to stay relevant is a constant problem.


Following the death of her mother and a series of self-inflicted setbacks, young Ingrid Thorburn (Aubrey Plaza) escapes a humdrum existence by moving out West to befriend her Instagram obsession, a Los Angeles socialite named Taylor Sloane (Elizabeth Olsen). After a quick bond is forged between these unlikeliest of buddies, the facade begins to crack in both women's lives with comically malicious results.


‘Ingrid Goes West’ shows an insight inti its subject matter like few movies do. IT completely immerses the viewer within its landscape and can make them feel equally as involved within its narrative whether they know what Instagram is or not. It is compelling, deeply empathetic and darkly humorous. But it’s also very daring in the way it goes about this. It never preaches some story of redemption or tries to convey any message in general. It simply examines what happens when we mistake fiction for reality, and idolise something beyond what it is worth. In other words, it’s about us.


But as well as tackling the broader themes of our society, ‘Ingrid Goes West’ does so by being a fascinating character study of its titular figure. It depicts an obsessed person who falls into the trap of using her obsessions ton escape from a harsh reality. It’s clear from the outset that her infatuation with Taylor Sloane is the latest chapter in a never ending pattern for her. There needs to have an object of desire within her life to instil it with purpose. In a society where people actively broadcast every moment of their lives, it becomes all too easy for Ingrid to find new people to obsess over.


All of this is brilliantly captured by Aubrey Plaza. Rather than playing Ingrid as a cautionary warning she injects such a sense of tragic empathy into the role. She makes the character sympathetic but never fails to convey a sense of unease by reminding us of how unhinged she is. There is a distinct difference between Ingrid and ourselves, but Plaza’s performance adds a layer of humanity to the role that blurs those lines. She is also remarkably difficult to read, with her detachment carrying an intrigue all of its own that constantly makes the audience question how deeply laid her plans are.


What helps make the part even more authentic is how well written the character of Taylor is, as well as Olsen’s superb performance. It goes back to how well ‘Ingrid Goes West’ seems to understand the culture it is studying. Usually movies seem to think of internet culture as being astounded by anything mildly impressive. But Olsen brings a magnetic personality to Taylor as a character that makes her ability to flourish on this platform very believable. 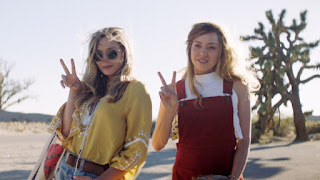 But it’s not just the main conceit of the movie that feels fully realised. Its entire world comes across as something that is intricately designed due to how well defined its supporting players are. From Ingrid’s landlord with his own forms of obsession to Taylor’s seemingly all-too-perfect husband, both played excellently by O’Shea Jackson Jr and Wyatt Russell respectively. The movie makes a point of stating how every person within the story has their own concerns and issues, but through the eyes of Ingrid all that matters is her perfect vision of life with Taylor through Instagram.


As well as that, the screenplay is always unpredictable and intriguing. It takes the route of so many darkly comedic character studies, recalling Scorsese’s ‘The King of Comedy’ with its themes and anti-social characters. While this movie sometimes lacks focus on what exactly it is commenting on the overall effect is a sharply written commentary on what can happen when the world becomes a mirror into someone else’s life. But as I said before, the movie never resorts to preaching or lecturing the audience. It is richly textured and involving enough to completely immerse you within its narrative. The dynamic of the characters is unpredictable but also perfectly logical as the film takes the time to firmly establish their personality before letting them interact. It’s handled with such energy that it is only after it’s all over that you realise how inevitable the whole state of affairs was. As well as being on point enough to lampoon aspects of society that didn’t even exist a few years ago, it handles its characters so intricately that this acuteness almost washes over you.


Sharply satirical but also endearingly empathetic, ‘Ingird Goes West’ is a biting commentary on how we live as well as an intimately staged character study.