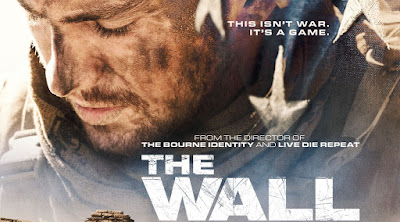 "When this is over, his own family won't recognise him."


There are few forms of film more challenging than a contained thriller. A director has to be in complete control of their craft to create one that is involving for its entire runtime, providing enough substance to sustain its runtime while also being capable of providing an entertaining experience for the audience. It has to justify not only its plot as any other movie would, but also find a reason to support its own format being presented in such a limited spectrum.

U.S. Army Staff Sergeant Shane Matthews (John Cena) is sent to investigate a pipeline construction site in the desert of Iraq, with his spotter, Sergeant Allen Isaac (Aaron Taylor Johnson). However, when they are both injured and pinned down by an enemy sniper, Isaac takes cover behind an unsteady wall and must use his limited resources and perspective save his comrade’s life as well as his own.


One common aspect of a well assembled thriller that is set in a contained location, is to establish each element of your narrative, characters and environment as soon as possible. Therefore, when the events of the movie itself begin to unfold, you can integrate each development within the structure of the movie itself, making its progression feel natural and free flowing as a result. Take Sidney Lumet’s masterful ’12 Angry Men’, which in one brilliant tracking shot introduces the audience to the outline of the case, the room in which the ensuing debate is about to take place and the broad traits of each character (all 12 of them). Uncovering each new part of the case as well as the character’s background not only feels gratifying, it feels absolutely vital to the movie.


I bring this up because one of the issues I have with Doug Liman’s ‘The Wall’ is that it fails to do this during its opening minutes. We get a loose sense of camaraderie between the two U.S soldiers, nothing complex but substantial enough for us to sympathise with them, but from that point onwards the environment and resources that are at the disposal of those characters are left unnoticed until they become essential to the narrative. It means that each new element feels like an obligation to pad the movie’s runtime rather than something the audience actually wants to uncover. As well as that, a few of them even feel contrived due to not being adequately set up.


However, one of the more interesting parts of Liman’s approach to telling this story is that he tackles it in a very procedural way.  As Isaac is pinned down we see him develop various strategies and plan out his next move step by step. There’s no lapse in time when it comes to the protagonist of the movie which if anything makes us feel more in tune with the frustration that boils within him for the runtime of the movie. As an audience we are treated to every minor struggle and the pain that accompanies it. With a bullet wound to the leg, crawling across a small patch of dirt becomes a much more excruciating task and Liman makes sure we know it. 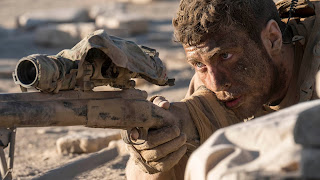 This all gives Aaron Taylor Johnson plenty of opportunity to convey that pain and anguish throughout the movie. Outside of a few expositional speeches he is not given many chances to dig into the inner psyche of his character, but the immediate danger he is in can be keenly felt by Johnson’s performance alone. What I found to be even more intriguing is how his ensuing psychological battle with the enemy sniper. Communicating to each other via radio, his attacker probes him for information concerning his own past, which Isaac withholds at first but occasionally reveals either out of desperation or an attempt to stall for time as he hatches his own plans. It is a pleasingly constructed psychological game.


What hampers it however is the fact that, as I said earlier, we don’t get an insight into either character on any deep level. We get some from Isaac but only in the later sections of the story, when the narrative has become repetitive and this emotional weight comes across more as an attempt to stall for time. As for the enemy sniper himself, the script has plenty of opportunities from which it could have delved into his deeper thoughts but chooses instead to have his dialogue be cryptic messages and threats, becoming what is essentially an hour long bad guy monologue rather than a study of two rival soldiers.


At the end of the day, the biggest problem with ‘The Wall’ is how it struggles to stay consistently involving for its whole runtime. I think that’s not just a case of substance though, Liman’s entire visual language seems to stay consistently flat throughout. Though it is initially exciting, it becomes monotonous when confined to a single space. Not to compare it to ’12 Angry Men’ once again as if the movie should be expected to stand alongside something as great as that (because frankly, who can?), but in that film Lumet increased the tension through visuals. His use of lower angles, intense close ups and high contrast lighting made the movie feel more the more involving through its runtime, ‘The Wall’ fails to do the same.


An effectively made thriller that lacks the nuance or depth to remain invigorating for its entire runtime.