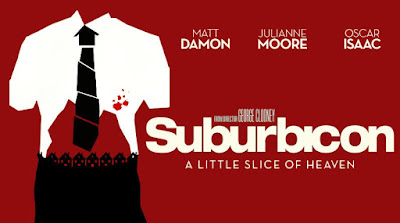 "Nothing like this ever happens here. This is a safe place."

Despite the fact that they are some of my favourite screenwriters and directors working in the film industry, I’m always inclined to be hesitant of a script that’s written by the Coens but not directed by them. I just think that their directorial sensibilities go so well with their own writing (figures I guess) that when anyone else attempts to undertake it the movie ends up being an awkward mess. This particular script was written by Joel and Ethan back in the late 1980s and with a few additions we see it now under the direction of George Clooney.

Suburbicon is a peaceful, idyllic, suburban community with affordable homes and manicured lawns -- the perfect place to raise a family, and in the summer of 1959, the Lodge family is doing just that. But the tranquil surface masks a disturbing reality, as husband and father Gardner Lodge (Matt Damon) must navigate the town's dark underbelly of betrayal, deceit and violence.

I’ve seen some manipulative marketing, but I don’t think anything falls into the very specific category of what the trailers and premise have done for ‘Suburbicon’. Though I couldn’t accuse it of being dishonest, the marketing so gracefully and so deliberately removes every element of controversy in order to sell a movie that, when shown in the same context as those crucial plot points, becomes a very different beast to that which was advertised. I won’t spoil it for those interested in seeing it but suffice to say that ‘Suburbicon’ has socially relevant ambitions, although I don’t think it comes close to actually fulfilling them.

Though there are many problems with ‘Suburbicon’, my main take away from it was that the movie simply doesn’t know what it wants to be. On the one hand it seems intent on presenting itself as this anarchic black comedy with a mean edge and hard lessons, but in between each scene that alludes to that movie we find ourselves locked in a preachy, contrived and melodramatic fable that tried to have a social message but ultimately adds nothing new to the conversation or says anything even remotely interesting.

As I said earlier, the movie was written in the 1980s by the Coens and has subsequently been added to by both Clooney and an extra screenwriter in the form of Grant Heslov who played a part in writing all of Clooney’s previous directing efforts. All of this feels very evident, as the movie comes across not only as four different visions crashing together awkwardly, but also seems like a script that was rightfully abandoned in the first place. Within the first act of the movie alone it brings up and tried to tackle racial tensions, organised crime, domestic satire, twin sisters, family disputes, insurance fraud and a home break in. To say it feels jumbled and disjointed would be a huge understatement.

Any one of these basic plot elements might make for an interesting movie, especially when paired up with the Coens brand to explore some of humanity’s darkest themes in the most humorous of ways. But either their core concept has been brushed aside in the wake of too many conflicting ideas or there was never a good core concept to begin with. As a director Clooney doesn’t have a good enough grasp on def of tone to make the scenario work even if the script could somehow hold itself together. The movie presents its characters as the most deplorable people you could imagine, but then proceeds to get involved in a kind of mystery thriller that it thinks I should be invested in, all before delivering a bunch of sincere social messages.

None of these aspects match each other, and nor do the performances. Sometimes they’re leaning more heavily into the darkly satirical but then the script will force the actors to change pace and completely reverse their characters. It’s hard for me to even say whether the likes of Matt Damon or Julianne Moore were good or not because while they were at least convincing in their parts for any one scene, as a whole they descend into deranged caricatures, which would be fine if the film didn’t insist that I actually take both its mystery and messages seriously. The only thing I can completely commend is the ever charismatic Oscar Isaac, who is at least magnetic in his part as the mobster who kind of but not really instigates the whole situation.

The only thing to punctuate these weird tonal shifts are the bursts of violence, which feel both gratuitous and weightless at the same time. It’s as if the movie thought it were under the impression that it could instil meaning into itself by adding more bloodshed, even though that bloodshed in question lacks any discernible tension, impact or consequence to it. Watching the movie unfold felt like I was gambling with what tone of film ‘Suburbicon’ would try to be next.

‘Suburbicon’ is a messy, hollow and ultimately pointless exercise. A big disappointment considering the talent involved.