Blade of the Immortal

"You're lucky that you get to die."

One of Takeshi Miike’s earliest films, ‘Ichi the Killer’ opens with a scene in which the main character of the movie is masturbating as he watches a woman in the building across from him being raped. When he’s finished the title of the movie rises out of his steaming pile of ejaculation. I feel like that sets a certain standard for his work, and though you won’t find anything nearly as outrageous or disturbing as that in his samurai film ‘Blade of the Immortal’ it carries that same sense of absurdity and ultra violence that makes Miike so distinct as a filmmaker, for better or worse.

Rin Asano is a young woman seeking revenge against a group of swordsman who killed her parents. Her desire for vengeance leads her to seek out a mysterious lone samurai, who according to legend cannot be killed by any injury, an immortal warrior.

Say what you will about Miike, but I think it’s a rarity that the violence in his movies is ever completely unjustified. It’s bold, provocative and understandably controversial, but never feels like empty spectacle from what I’ve seen. I say from what I’ve seen because ‘Blade of the Immortal’ happens to be Miike’s 100th directorial outing. From ‘Audition’ to ’13 Assassins’, Miike has set the bar pretty high for his own filmography. ‘Blade of the Immortal’ rivals any of his previous efforts on the level of spectacle. It really is a mesmerising, artfully rendered, ridiculously fun, dismembering piece of cinema that any fans of the genre are sure to devour.

It’s hard not to be swept up in the care and affection Miike seems to have for this story. Despite being plastered in blood and spectacle, he never looks down upon the narrative elements that assemble the plot. He never tries to wink to his audience nor does he avoid being sincere when he need to either. Miike embraces every aspect of this story but still keeps his grip on the source light enough so as to have plenty of fun along the way. He moves swiftly from one action spectacle to the next whilst acknowledging the quieter moments that give those bursts of violence the necessary weight.

When it comes to assembling action scenes then ‘Blade of the Immortal’ excels. It’s a far cry from the absolute best of Asian action cinema but it’s certainly an entertaining ride, with Miike employing a good use of long sweeping shots that allow every hit and slash to be captured perfectly and clearly. The choreography is evidently brilliant, and the director clearly has big confidence in it being just that given Miike’s decision to make each scene fully lit, never obscuring anything for the sake of making it look more impressive than it really is. 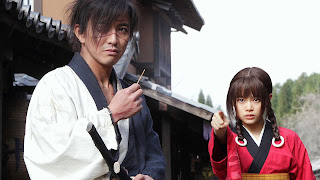 But going back to those aforementioned quiet moments, as they are what make ‘Blade of the Immortal’ a more meaningful experience than pure empty spectacle. I’m not going to pretend that the movie is thematically rich or deeply complex because it isn’t. But what it does have is strong characterisations and instantly endearing characters. We feel invested in their plight and are able to recognise each individual player from a moments glance. Once a character turns up with their own unique stylistics you’re unlikely to forget them for the rest of the movie. From their meticulously detailed costumes to the intricate and utterly awesome weapon design, it’s within the details where the movie seems to be at its best.

Those details manage to sink their way into every aspect of the production. With the set design and costumes all being meticulously crafted to give them this versatile quality. The film also has this tremendous depth of feel on a visual level, earning praise as one of the best looking films of the year so far. The colours are rich and on a consistent palette, being able to evoke a range of atmospheres depending upon what the story demands from them. Whether he’s photographing an entire army of samurai or a simple conversation between two intimate friends, cinematographer Nobuyasu Kita seems to take it all in his stride.

It takes a lot to stage an engaging action scene when your protagonist is an immortal warrior. But not only does Miike keep the action varied and interesting at all times, but his command of how to pace and structure those kind of scenes is what really sells it. He knows when to employ restraint in how he depicts action and violence, which allows him to escalate both of those aspects as the film ploughs on. Though it does still become somewhat exhausting by the end, particularly when the film colludes you into thinking it’s about to end only to go on for another lengthy action scene, it’s still very impressive example of how to structure an action spectacle.

Always stylish and always entertaining, Miike’s 100th film is a triumph of violence and spectacle.