"Superman didn't just give people hope, he made them see the best parts of themselves."

So where to start with ‘Justice League’? It’s a movie that should have been one of the most anticipated cinematic events in recent memory and I’m sure that for some people it very much is. But if you’re like me, and you felt beaten into the ground by the DCEU so far (with the exception of anything directed by Patty Jenkins), can’t escape the constant news of production troubles and feel like I’m watching an accident about to happen in slow motion, then I have to face the somewhat depressing fact that I’m not even remotely excited for this movie. Still, optimism and such right?

Bruce Wayne (Ben Affleck) enlists newfound ally Diana Prince (Gal Gadot) to face an almighty threat to earth. Together, Batman and Wonder Woman work quickly to recruit a team to stand against this newly awakened enemy. Working alongside The Flash (Ezra Miller), Aquaman (Jason Mamoa) and Cyborg (Ray Fisher), the team must band together to prevent a catastrophe of epic proportions before it is too late.

I’m caught in a weird paradox in how to judge ‘Justice League’ as a movie. I didn’t find it as enraging of an experience as ‘Batman v Superman’ or ‘Suicide Squad’ but at the same time I feel like those two movies are far more interesting. For better or worse, every DCEU movie until now could at least say it was attempting to do something unique, but ‘Justice League’ not only feels like an incredibly most formulaic attempt at crafting a big budget superhero movie (at which it fails), it feels like it was made purely as an obligation.

It’s almost an exact reversal from its predecessor, because whereas ‘Batman v Superman’ felt like five movies trying to be one, ‘Justice League’ feels like the first act of a movie stretched into a full feature. By the time the first act of the film is over, the characters have developed about as far as they will for the entire movie and therefore remain static for the rest of its runtime. There are still some plot points to go, but basically by the time the movie reaches the one hour mark it’s already run out of any intrigue or potential development that could sustain its narrative. At which point it just becomes a parade of genre conventions that have been executed much more confidently in other, far better, movies.

What this even worse is that the plot itself was always going to be an afterthought, and I don’t even mean that as a criticism. In almost any major blockbuster the narrative serves as a means to hang the interesting elements around. It’s fine for the villain the be nothing more than a McGuffin (well, not “fine” but at least forgivable) providing that there is some substance to be found in other areas such as the character dynamic, development or just simple entertainment value. But you’ll struggle to find any of those within ‘Justice League’. The movie grinds through one predictable plot point after another without ever giving thought to actually endearing us to these superheroes or making their joining together feel meaningful.

What makes the lack of a compelling character dynamic all the more frustrating is that there is a very strong cast with a lot of potential on display here. Gal Gadot loses none of the charisma that carries her through ‘Wonder Woman’ but her role here feels static and obligatory. Ezra Miller’s socially awkward charm is sometimes humorous but sometimes grating. Jason Mamoa certainly commits to the role of Aquaman but it’s a role that becomes irritating and frustratingly one note. Understand that I’m not looking for huge amounts of depth here but I would hope for more than a single characteristic, especially when that characteristic seems to be “he’s the guy that shouts a lot”. I can’t even comment on Ray Fisher as Cyborg because a combination of some very shoddy CGI and almost no discernible characterisation makes him feel invisible. 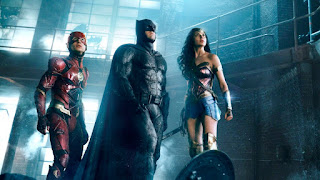 It’s no secret that ‘Justice League’ was a movie with a troubled production and it certainly shows. Though there aren’t any major errors it’s hard to overlook the constant shifting in tone from scene to scene, as well as the fact that every Whedon-esque quip seems to be shot in a close up with no other actor in the shot as it happens. Though this lighter tone is preferable to the constant droning of vaguely defined philosophical themes, the movie never replaces that with actual character moments. Instead we get a film that feels like anything that wasn’t an action scene, a character quip or a cool shot for promotional purposes. I’ve sometimes criticised the MCU for valuing quick entertainment over genuine substance, but that doesn’t seem to scratch the surface of how thin ‘Justice League’ is on that front.

Let’s talk about those action scenes for a minute as well. I don’t want to come across as if I’m faulting the movie purely for using CGI as virtually every film does nowadays, but there’s so little weight and versatility to the visual effects of ‘Justice League’ that I could never become invested within the action. It’s bad enough that I had no investment in the characters, but the action just feels so artificial and contrived. On so many occasions the action comes down to composing the actors face onto a CGI double against a giant green screen background, which once again isn’t a sin by itself, but when it’s executed with such a repetitive visual style, flat composition and no depth of feel then it degenerates into an experience I can only liken to watching someone else playing a video game with really good graphics.

I had hoped that Whedon’s involvement might help provide some more connective tissue to Snyder’s vision since the director seems to excel at visuals whilst struggling to tell a naturally flowing, cohesive narrative. But instead the film still plays out like a series of set pieces that are barely held together. Character motivations and actions seem to change from scene to scene, narrative beats don’t seem to have any meaningful build up or resolution to them and the most potentially dramatic and cathartic moments of the movie land with a decidedly hollow ring to them. None of these scenes are inherently bad, most of them are perfectly fine, but there’s never any underlying connection that would allow them to become more than the sum of their parts.

At the end of the day, ‘Justice League’ is a movie that feels obligated to exist, one with no substance, meaning or weight to it.