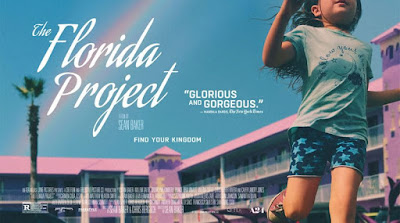 "I can always tell when adults are about to cry."

Though it was not he feature debut as a director, I think there can be no denying that Sean Baker’s breakthrough was 2015’s ‘Tangerine’. Not only was it a remarkable feat of independent filmmaking, but its story and themes were as progressive as they were empathetic. Its style never overshadowed its substance, nor was it there to substitute for a lack of one. All in all I wouldn’t hesitate to call it one of the best movies of 2015 and it’s for that reason I’m very excited to see his follow up feature, ‘The Florida Project.’.


During the summer, six-year-old Moonee lives in the Magic Castle, an extended-stay motel in Kissimmee, Florida. She spends most of her day hanging out with her friends, which consists of visiting other motels, tourist spots and the local businesses around town. All of this comes to the dismay of Bobby (Willem Dafoe), the empathetic landlord of the motel.


In many ways, ‘The Florida Project’ can be seen as a companion piece to ‘Tangerine’. They both offer a portrait into someone’s life rather than a standard narrative. They provide a portal into a world and subsequently use that portal to tell a compelling character study. The difference comes in their presentation though, as where ‘Tangerine’ was filmed entirely on an iPhone, ‘The Florida Project’ was shot using 35mm film. Baker makes the most of this upgrade and uses it to compose some very aesthetically pleasing shots. There’s also a beautiful kind of contrast in seeing the trashy environment in which the film takes place rendered with such exquisite composition and depth of feel.


But as well as being fantastic on a visual level, ‘The Florida Project’ retains that great sense of authenticity that made Baker’s previous film so memorable. To describe it on paper is almost doing it injustice as it’s difficult to recount the film without making it sound contrived or overly sentimental, but Baker manages to find a perfect balance between crafting heavy emotional beats while immersing the viewer in a fully believable world. Part of that is achieved through his rigourous attention to detail, not just in terms of execution but also in how he treats the characters. There are specific traits of both the environment and the people who populate it that feel wonderfully consistent and genuine.


There’s a brutal honesty at the heart of ‘The Florida Project’ but the film never goes out of its way to beat you over the head with it. We can see the tragically bleak situation the characters are caught in just as clearly as we can see their tragically human flaws. But by framing this story through the eyes of a child’s summer odyssey Baker renders it all the more heart-breaking. We can see the inevitable loss of innocence even as we watch the day to day adventures of the children. Moonee is written in such a way that illustrates how she is aware of their predicament, but like any child still wants to have fun and adventures all day. There’s complexity and depth to her struggle that makes her more than just a clichéd movie kid.


The performances elevate this mood even further. It’s actually astonishing how authentic the child performances in this film are. There aren’t that many obvious dramatic moments but in a way that is what makes them all the more believable. The characters experience things in patterns rather than moments of drama and when the heavy emotions do come forward they are made all the more impactful by how starkly they contrast the characters daily routines. 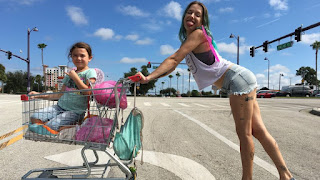 But I can confidently say that the standout of the movie is Willem Dafoe. I can’t overstate how much humanity Dafoe adds to the movie as his appearances never fail to add a layer of empathy to the movie. He fully conveys a characters concerned with running the motel but at the same time unable to detach himself from the personal lives of the people within it. Dafoe makes such good use out of this conflict of interests that he even manages to work a sense of optimism into the role that makes it even more endearing. Bobby is a character that wants to make his community better, a wonderful human impulse that he always seems to carry with him.


My one and only issue with ‘The Florida Project’ is it’s ending. Specifically the last 30 seconds and though it seems odd to criticise a film for a mistake that small, it comes at such a pivotal moment in the movie that it can’t help but press on my mind. Without spoiling anything, I’ll say that it was filmed on an iPhone without the permission of the area in which it was filmed, meaning that it’s a drastic step down in quality, feeling completely detached from the rest of the film and is a very confused shot to end on. Not only that but the entire sequence seems to be counterintuitive to this heart-breaking realism that the movie had done so well at portraying for the rest of its runtime.


But outside of that, ‘The Florida Project’ is a remarkable film. It perfectly demonstrates the idea that a movie can be so much more than the sum of its parts. In this case the parts are just a few snapshots into the daily adventured of some kids in a trashy motel. But the overall effect is something that has to be experienced.


Beautifully executed and endearingly written almost completely without fault, ‘The Florida Project’ is one of the year’s best movies.