The Killing of a Sacred Deer

"The way I see it, this is the only thing that comes close to justice."

There comes a point where if you start expecting the unexpected to such a degree that that same unexpected quality can suddenly become predictable. Now, as vague and uninteresting (as well as confusing) as that sentiment may be, it’s actually something that worries me whenever I find an innovative and unique director. Talents like Yorgos Lanthimos are rare, so the idea that they could ever become predictable or self serving, throwing in weird tropes not because they mean something but because they’re weird, is worrying.


Dr. Steven Murphy (Colin Farrell) is a renowned cardiovascular surgeon who presides over a spotless household with his wife and two children. Lurking at the margins of his idyllic suburban existence is Martin (Barry Keoghan), a fatherless teen who insinuates himself into the doctor's life in gradually unsettling ways. Soon, the full scope of Martin's intent becomes menacingly clear when he confronts Steven with a long-forgotten transgression that will shatter his domestic bliss forever.


Lanthimos’ previous films like ‘Dogtooth’ and ‘The Lobster’ both shared a common style in various ways. For all their social awareness, perverse concepts and disturbing content, they were both darkly humorous movies. Admittedly that may say more about my own twisted sense of humour than the movies but the point is that any and all humour Lanthimos injected into those films has been exiled from ‘The Killing of a Sacred Deer’. This is a highly taught, masterfully composed and deeply unsettling thriller that at times feels like a homage the likes of Polanski, Haneke and Kubrick, but at the same time feels so breathtakingly unique in its own right.


It takes real directorial talent to elicit a sense of dread and suspense on par with what Lanthimos does here. Especially when your visual style isn’t highly kinetic or arresting, it’s actually still and oddly meditative. Lanthimos manages to create a masterclass of suspense through his use of exquisitely composed images that when strung together paint a terrifying portrait of deep human fears. It’s almost mesmerising in how it’s relatively quiet approach creates such a constant state of dread.


Lanthimos has always had a talent for creating a sense of unease through the subtlest of techniques. From the very start of ‘The Killing of a Sacred Deer’ there is a sense of things being not quite right. This atmosphere never feels overbearing or obnoxiously foreshadowing, but rather adequately sets up the sheer terror of what will unfold. It’s a kind of terror that reaches the viewer on both a visceral level as well as an existential one. Lanthimos is in perfect command of when to show restraint and when to go into full blown insanity. They’re at complete opposite ends of the scale and yet he weaves them into one another perfectly, all the while making us feel each passing second as if our lives depended on it. 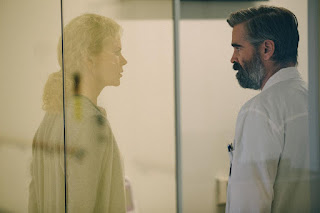 It’s easy to talk about nothing else than the raw emotional response I had from watching ‘The Killing of a Sacred Deer’ without actually explaining why. A large part of that is likely due to its visuals as cinematographer Thimios Bakatakis crafts this all consuming style that feels both strikingly empty but also mind numbingly claustrophobic. There’s an air of serenity that punctuates the film’s opening that is then shattered by how far it later descends into madness. The visuals retain this detached presence to them that renders the viewer as a powerless observer, and it’s what makes the movie all the more frightening.


A lot of this could lead to a very cold and clinical movie but Lanthimos is able to make his movie just as involving and intriguing as it is horrifying. Part of that is due to the terrific performances that are on hand. I’m glad that Colin Farrell is once again being consistently brilliant in everything he’s in. He plays the character of Dr Murphy with such self-assurance in the film’s first section that it makes his desperation later on all the more powerful when contrasted against it. The same goes for Nicole Kidman whose domestic bliss, like the tone of the movie overall, is utterly shattered. Then there’s Keoghan who carries such an air of menace with him at all times, not obviously at first but enough to instil a sense that something is wrong and then make his transition seem natural. I can’t tell you how gratifying it is to see a director and his cast working in such perfect synchronicity.


Another remarkable feature of ‘The Killing of a Sacred Deer’ is its script. It has plenty of high minded concepts and broad ideas but at no point does the story feel like it’s stretching to facilitate them. Lanthimos is still as socially minded as ever but he does so through weaving these concepts with an intricate character study. You can examine this movie for its larger implications about what scares us as humans, or the mythical allusions that its title is a reference to, or you can see it as a tragedy centred on a man too confident to admit that he’s only human. Anyone can take an average script and inject a few philosophy passages into the dialogue. It takes a special kind of talent to well and truly integrate theme and narrative in a way that feels seamless.


Terrifying on both a visceral and existential level, ‘The Killing of a Sacred Deer’ is a masterfully crafted and highly taught thriller that weaves its themes and narrative perfectly.