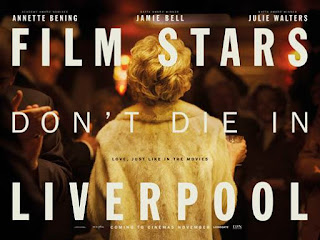 "I never expected Gloria Grahame to be in our kitchen making bacon butties."

There’s a tendency for movies about Hollywood, particularly ones about its very real history and how that compares to its current state to be very self-congratulatory. They either celebrate a bygone age whilst glossing over its darker aspects or frame the story as a pat on the back “look how far we’ve come since then” ideal that makes it all better. I think given the events and revelations of the last few months, a movie like ‘Film Stars Don’t Die in Liverpool’ not only subverts that convention, but becomes all the more relevant.


Gloria Grahame (Anette Bening) was once a leading Hollywood starlet but now finds herself as a stage actor in England. When she collapses one night, she calls upon an old flame in the form of young struggling actor Peter Turner (Jaimie Bell) who takes her to Liverpool to care for her. As her health worsens, the two remember their brief romance that affected them in more ways than one.


There are plenty of evocative aspects within ‘Film Stars Don’t Die in Liverpool’ that instantly and efficiently paint a bleak portrait of what women of a certain age have to endure in the movie business. From the very first scene in which Annette Bening portrays a noticeable frail Grahame struggling to mask her feigning health through her elaborate make up routine, we immediately understand the meaning that her subsequent diagnosis has on her as a person. It’s not just her health that’s fading, but with each passing day the chances of ever recapturing her livelihood and passion that is acting start to grow more distant. The saddest thing is that with or without her illness, that was always going to happen anyway. Rejected by Hollywood for her age and relegated to the world of stage, it’s no surprise that she finds comfort in the arms of Turner.


That is, in part, what makes the relationship at the centre of ‘Film Stars Don’t Die in Liverpool’ so resonant. There’s an authenticity to it that never feels contrived. There’s never a moment when it fails to feel believable or understandable as the two characters are displayed to us in a way that makes their dynamic feel not just believable, but also inevitable. It also helps that it’s a relationship portrayed by two actors perfectly suited to their roles. There’s a fragility to Bening’s performance that is underpinned by a ferocious determination that makes her character incredibly endearing. She is vulnerable both physically and emotionally but still willing to fight for what she has left.


Bell on the other hand, is able to exude charm very effortlessly. I feel like it would be so easy to accidentally stray into the realm of exploitative when portraying Turner in this story, and give the audience the impression that he is simply taking advantage of Grahame. But Bell plays the role with just enough deftness and adoration for his other half that his affection for her feels genuine. Despite their disadvantages their relationship isn’t one of self-pity either. There is a lot of joy and comfort to be found in their romance and the movie treats it as such, even if there is an underlying sadness to the whole story. 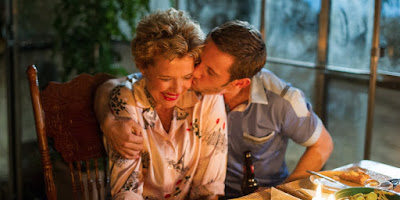 Outside of these great performances and subtle character work though, ‘Film Stars Don’t Die in Liverpool’ is a somewhat conventional romantic drama. It alludes to some statements on the broader picture but is mainly focussed on the more intimate side of the story, which is fine but more than once it’s caught awkwardly between the two. I feel as if the movie would have been better off focussing more on one aspect rather than half-heartedly trying to make more grandiose statements when they really are not necessary. It is not necessarily worse for those moments but nor is it any better.


This sense of awkwardness also comes across in the overall style of the movie. For the most part the film goes out of its way to relish in period details and lavish subtleties of the era which does a good job to ground the film in reality. But then it also throws in these strange stylistic choices, especially within its scene transitions, that despite not being bad do feel out of synch with the style the rest of the film was going for. It’s made worse when the film starts to feel a little manipulative when it comes to emotions. It hams up the music and plays moments for melodrama rather than authenticity. The odd thing is that I was fully on board and invested within the emotions of the scene already, but then the film attempts to heighten the emotions and in doing so comes into conflict with itself. But despite all of this, the film is still emotionally engaging and genuinely endearing for most of its runtime.


Held up by two charming performances and an endearing relationship at its core, ‘Film Stars Don’t Die in Liverpool’ is an engaging romantic drama.