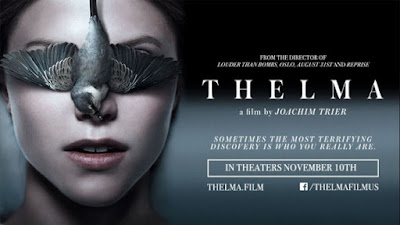 "This is something much greater than us."

2017 seems to be the year of allegorical stories relating to the inner turmoil of female characters through movies that appear to be niche genre pictures on the surface. I know that sounds weirdly specific but when you consider the fact that we’ve seen a cannibal movie being used as a metaphor for identity and class, as well as a monster movie telling a story of a woman struggling with addiction and abuse, it kind of makes sense. The latest one is ‘Thelma’ from director Joachim Trier.


A young Norwegian woman by the name of Thelma (Eili Harboe) and with a strong religious background moves to Oslo. She soon finds herself falling in love with another girl, but what’s even more unexpected for her is that she discovers that her newfound feelings have triggered inexplicable powers within her.


From what I have seen of Joachim Trier I’m honestly not really sure what to make of him. ‘Oslo, 31 August’ was a truly fantastic and layered character study. But then ‘Louder Than Bombs’ was a staggeringly conventional drama, one that I wouldn’t necessarily say was bad but certainly I’d struggle to remember anything about. ‘Thelma’ seems to fall somewhere in between, in that there are certain ideas and moments within it that show an inkling for a highly interesting movie, only to get bogged down in flat conventions that not only rob the film of any unique potential it had, but also hinders the story as a whole.


Putting aside the fact that the concept of a young woman struggling with oppression and finding herself in possession of telekinetic powers has been done before in movies like ‘Carrie’ (not to mention using the protagonists first name as the title, plus ‘Carrie’ is awesome so that hardly helps), there’s a lot to be desired within ‘Thelma’. Trier does a great job building mystery and intrigue throughout the first act of the movie, as the central concept builds up and the immediate dread of pondering what the implications of these powers might be.


Sadly though, after that the film just falls flat and can’t sustain itself for the rest of the narrative, at least not in a way that’s unique or interesting. It takes an unusually clinical approach to the way it presents its characters and that makes it difficult to feel invested in their struggles. ‘Thelma’ by its title alone, should work as a character study but it never establishes a connection to its central character that would invite interest from the audience. In short, it seems far more interested in its own broader themes than the intimate parts that would endear us to those themes. 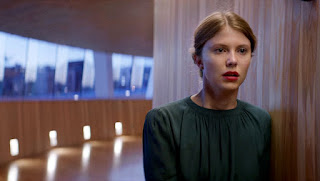 What also stopped me from becoming fully invested in the movie was how it never established any logical boundaries for Thelma’s powers. I understand that not everything needs to be explained but it’s difficult to feel the weight or stakes of a situation when the limits of what the characters can achieve is never defined. Granted we don’t explanation around the power limits or reasoning in ‘Carrie’ (not that I was constantly comparing them but I do feel like De Palma’s film sets a good standard and given the similarities between the two it’s a fair contrast), but the film’s structure and pacing lent itself to her abilities escalating towards a climax. In ‘Thelma’ there’s a constant need to derive tension that feels weightless because the parameters have never been established.


All of this being said, I can at least comment the movie for being well made on a technical level. Trier’s direction is aesthetically pleasing and each shot felt well composed. The cinematography in particular feels like a good step up from his previous work. It may lack the hypnotic visual beauty of ‘Oslo, 31 August’ but it does work very well for the mood that ‘Thelma’ seems intent on establishing from its opening few scenes. It’s a style that’s consistent and interesting but much like the story never seems to evolve beyond what it initially presents itself as.


The performances are difficult to judge. Trier insists on keeping the characters so muted that he never really lets his actors move beyond their basic function. We keep being told of this great energy within Thelma but Eili Harboe is never given the chance to convey that. I admit there is something unnerving about the contrast between being told Thelma has this great power and her monochromatic look that contrasts it. But once again I find myself wishing the movie would take that concept and develop it in some way. Without any sense of escalation the movie plays out like a meandering, aimless waste. It’s pretty to look at but I never felt like I’d gained anything from going on this journey.


‘Thelma’ is a well constructed film but it never develops its characters or concept enough to make its ambitious themes feel engaging.