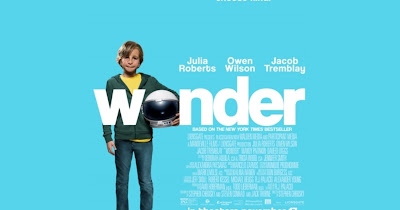 "I've had 27 surgeries to help me breathe, see, hear. But none of them have made me look ordinary."

There’s an unfortunate tendency for films like ‘Wonder’ to be overly sentimental, in fact it’s almost a cliché for a critic to point this out in a movie of this kind. Understand that this story absolutely warrants sentimentality but can still fall into the trap of using overkill on that front if it doesn’t feel earned. When movies try to manipulate the audience into caring rather than putting the effort into actually crafting a compelling story. Once you notice the techniques filmmakers use to do this it’s hard to avoid them.


August "Auggie" Pullman (Jacob Tremblay) is a fifth-grade boy living in North River Heights in upper Manhattan. He has an extremely rare medical facial deformity and due to numerous surgeries, Auggie had been home-schooled by his parents Isabel (Julia Roberts) and Nate (Owen Wilson). But as Auggie is approaching middle school age, Isabel and Nate decide to enrol him in to attend school for the first time.


In Donald Glover’s stand up special ‘Weirdo’ (don’t worry, I promise this is going somewhere) he featured a routine where he talks about kids and bullying. His reasoning was that kids can be the cruellest people of all because unlike adults they have no concept of empathy or consequence. At the end of the day our main motive to not punch a random person in the street is that we know the likelihood is that they will punch us back and that wouldn’t be good. But a child’s brain doesn’t work that way, so they just tend to say whatever they want.


It’s this kind of logic that drives a central theme in ‘Wonder’. It’s a movie that points out how one child being cruel to another is one thing, but the prejudice of an adult against that child is something all the more disturbing. I won’t say anything else in order to avoid plot spoilers, but in these moments ‘Wonder’ is a far more intelligent and thoughtful drama than the usual kind of sappy melodrama you would find on the Lifetime channel. Every emotional beat of the movie feels earned and genuine, never resorting to an overtly manipulative tactics to garner some contrived emotion. Or at least for the most part, but even then it holds off the cheesier aspects until the end so they feel a little more deserved at that point. 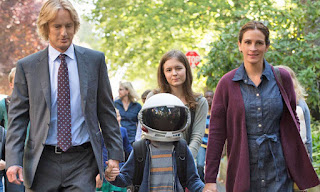 It’s surprising because if I was going to assume ‘Wonder’ would fall down anywhere it would be either an overly sappy tone or not being able to sustain itself with its story. But in fact if anything the movie feels too overstuffed. There’s a lot of interesting content here in how it not only explores Auggie’s arc but also the way the lives of those around him develop and are affected by his influence. From his best friends to his bullies and his older sister, there are a lot of varying plot threads and arcs. They all work and feel satisfactory, but the way they are presented makes ‘Wonder’ feel a tad episodic and unfocussed. Instead of fully exploring one topic it seems to just move on to the next plot thread. Though the script manages to tie up enough loose ends so that the progression of these characters feels like a logical leap, it is a little frustrating to see an interesting story cut short.


But the good thing is that each of these stories has a talented cast to bring it to life. I’d be lying if I said all the child actors can hold their own but most of them are serviceable, and Tremblay is exceptional. Auggie feels less like a protagonist and more of an instigative force, but Tremblay still makes the most of the role as it develops. You can sense the palpable nervousness when Auggie first sets foot into his new school and you feel each small victory and defeat largely due to the way Tremblay sells it. His entire physical demeanour changes with the simple act of a fellow student sitting next to him or saying hello.


Owen Wilson and Julia Roberts are also very good. They each show a great level of conflict in their characters that helps make them empathetic. They each want to give their son the fullest range of opportunities but are also highly protective of him. Their concern that others will reject Auggie is not only a valid one, but at times it’s proven true. But due to it being Roberts and Wilson they still carry enough charisma and charm to make them feel like fully realised individuals, likable ones at that. They’re also nuanced though, knowing when to let the quitter moments of a performance speak for themselves.


Though it’s a little cluttered and unfocused, ‘Wonder’ is a sincere, affecting and inspirational drama.