"So there's this guy Johnny, a true American hero, to be played by me. He has it all, good looks, friends and also maybe Johnny is vampire."

I imagine there were a lot of varying options when deciding what direction to take with a movie about the making of ‘The Room’. On the one hand there is the obvious hilarity in presenting the worst film ever made to an audience, but then again there’s also a certain affection for the passion that went into making said movie. There’s a need to explain events as they happened but also a need to preserve the mystery of the enigma that is Tommy Wiseau. It’s quite a juggling act but luckily, ‘The Disaster Artist’ manages brilliantly.


Aspiring actor Greg Sestero (Dave Franco) is taught to open up and embrace the uniqueness of his craft by a mysterious fellow actor called Tommy Wiseau (James Franco). The two travel to LA together but soon become frustrated with the difficulties of landing a part, leading Tommy to write, produce and direct a movie that he and Greg will star in together.


Another issue when deciding what tone to take ‘The Disaster Artist’ in would be to what degree should it cater to fans of ‘The Room’? Would the film stand on its own or descend into a self-indulgent parade of inside jokes? While ‘The Disaster Artist’ is certainly funnier and more enjoyable if you have seen ‘The Room’, it’s just as relatable and empathetic regardless. If you’ve ever had an ambition to do anything, you’ll sympathise with Tommy and Greg’s story because at its core ‘The Disaster Artist’ is about two people who had this dream and, for better or worse, saw it through to the end.


It’s a testament to the movie as a whole that they manage to make Tommy such an endearing character without revealing any information regarding who he is or where he comes from? None of his motivations are explained or deconstructed but we grasp onto this basic core belief he has that he can make it if he tries hard enough. He remains an enigma of a person but the script demonstrates time and time again that he has a deep passion for what he does. But at the same time it’s also not afraid to show the darker aspects of his time making ‘The Room’ and the abuse he inflicted on his actors and crew.


But since I’ve mentioned Tommy I can avoid it no longer. Let’s talk about James Franco. While Franco has been consistently good for the last 7 years this is the first time I’ve seen him completely transform himself since ‘127 Hours’. It’s truly staggering to see Franco completely immerse himself in this role to a point where I forgot I was even watching an actor. He embodies Wiseau not just through prosthetics and an uncannily good impression of his accent, but conveying this oddball sense of passion that Wiseau always carries with him. I felt truly connected to Wiseau’s struggle thanks to Franco’s performance and it never failed to keep me invested in the movie. It’s endlessly charismatic and often played for laughs but it’s also intimate and poignant when it need to be as well. 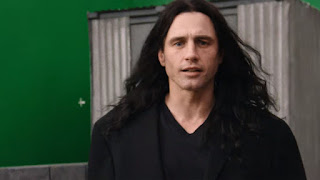 The rest of the cast are also on top form. Though his role is less showy than his brothers, Dave Franco also does a great job portraying a fellow wide eyed dreamer. Unlike Tommy we get to explore a bit about what motivates Greg and his own history, which Dave uses very well to create a fully fleshed out character. His arc and evolution through the movie is a joy to watch. Seth Rogen and Alison Brie may not be playing against type but they’re talents are used well within the plot. Though there are dozens of cameos I didn’t find any of them distracting or obnoxious, they felt well integrated into the story even when the celebrities were playing themselves.


‘The Disaster Artist’ also has a great balance of tone. It explores some of the more sadistic methods Wiseau used to make his movie, such as mistreating his actors and insulting his crew. But at the same time it acknowledges the absurdist humour in the whole situation. Franco’s direction does rely a little too much on handheld camera use for my liking but it does help add a documentarian kind of feel to the movie as well as a personal, more intimate angle from which to view these characters. It’s as if the viewer is also there on set, experiencing this madness first hand as well.


I think what ultimately makes ‘The Disaster Artist’ so endearing is that it has a deep found love of its own subject. It plays the terribleness of ‘The Room’ for laughs but it’s also well aware of how it represents the fulfilment of someone’s lifelong dream. It takes time to build its characters and establish their relationships with one another to a point where by the time Greg and Tommy conclude to make their own movie, even though we know how it’s going to turn out, we’re well on board with them as they do so.


A hilariously loving tribute to the worst movie of all time, ‘The Disaster Artist’ is an endearing look into one of the most absurd dream fulfilments ever.