"All this anger, it just begets greater anger."

Martin McDonagh may only have a two feature films to his name, but he’s managed to make a huge impact in the short time he’s been working in the film industry, cementing himself as one of the finest writers and directors working today. ‘In Bruges’ showcased McDonagh’s brilliant blend of comedy and tragedy, and then ‘Seven Psychopaths’ cemented it. It goes without saying that I’m excited to see his latest feature.


After months have passed without a culprit in her daughter's murder case, Mildred Hayes (Frances McDormand) makes a bold move, painting three signs leading into her town with a controversial message directed at William Willoughby (Woody Harrelson), the town's revered chief of police. When his second-in-command, Officer Dixon (Sam Rockwell) an immature mother's boy with a penchant for violence gets involved, the battle is only exacerbated.


I should start by saying that I loved both of McDonagh’s, previous films. So don’t think that when I call ‘Three Billboards Outside Ebbing, Missouri’ his masterpiece that I mean it lightly. This is a movie that managed a juggling act so intricate and masterful that it almost defies belief. The idea that a film can be this funny yet this deep, so violent yet so poetic and so cathartic yet ambiguous in just the right ways, it’s something I haven’t seen any film in recent memory achieve to such a great extent.


There’s an unpredictability to McDonagh’s writing that never fails to intrigue an audience. But that unpredictability doesn’t come from simply shocking his audience, or even subverting expectations. It comes from subtly re-writing the basic structure of how movies are supposed to unfold. Character arcs, narrative points, thematic development, on a subconscious level we all expect these elements of a movie to reveal themselves in a certain way. The ways of presenting them become convention due to how well they work, and diverging from those basic rules of writing often results in an ineffective script. But McDonagh somehow defies those conventions whilst still endowing his story with a sense of structure, progression and catharsis.


I think one of the ways that McDonagh manages to achieve this is through the depth he endows to each character. None of the characters within the movie are painted in a simplistic light, they all have complex arcs that develop in a way that’s both surprising but almost inevitable. Each character is memorable but also grounded, and it’s through that combination that McDonagh ensures that every character decision and action is as surprising as it is understandable. Any of the character arcs within the movie are stunning on their own, but when woven together in such an intricate way it makes for an utterly satisfying experience. To see these characters that you thought you knew suddenly interacting with one another in ways you never expected is so gratifying, and because it’s done so subtly there’s a sense of completion to accompany it.


The thing is, having characters randomly bump into one another wouldn’t be a fulfilling viewing experience. But when the characters are so clearly drawn as they are in ‘Three Billboards’, and you as a viewer feel so endeared to them in light of their flaws, when they do change you feel as if you’ve changed with them. Each character possesses their own flaws and it’s those flaws that drive them. Whether it be prejudice, depression or grief, everyone in ‘Three Billboards’ has something that is both holding them back as well as pushing them to act. 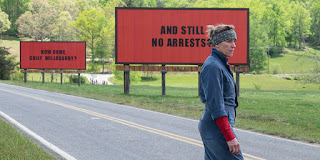 But it’s one thing to write this complex of a script, but it worth little if the actors were not capable to convey that complexity. Fortunately that is not the case with ‘Three Billboards’ as every performance is simply phenomenal. There isn’t a single performance in the movie that fails to inject a great level of humanity into these characters that could so easily have become caricatures. Frances McDormand expresses anger throughout the movie, but also has a level of vulnerability that becomes more apparent as the movie unfolds. She’s principled and obvious has a righteous cause, but as the situation she instigates spirals out of control her exact relationship to those principles reveals itself and it’s both heart-breaking and beautiful in its empathy. Woody Harrelson shines as Chief Willoughby, also striking a great balance between determination and vulnerability. He also expresses a great deal of humour that not only serves to be entertaining but helps ender you to Willoughby as a character.


But I think the best performance in the movie is Sam Rockwell as Dixon. To spoil anything about the way his character progresses would be a travesty, but I can say it’s my favourite arc in a movie filled with them. Rockwell executes so perfectly in his performance, never forgetting to acknowledge the anger and prejudice his character carries. But also not painting him as one note for his actions, which is what makes his subsequent arc feel believable and endearing.


It would be easy to overlook McDonagh’s direction in favour of his amazing screenplay, but he handles the film very well from the director’s chair as well. His understated handling of violence, drama and humour is what helps tie the contrasting tones together. He never overemphasises anything on a visual level and therefore nothing seems out of place or contrived. The only flashy piece of direction is an amazing long take sequence that you might not even notice on first viewing. Or maybe that’s me just looking for an excuse to rush out and see this movie again.


Films like ‘Three Billboards’ are why I love movies, a rollercoaster of emotional depth and complex writing that has the potential to be a future classic.