"If you're there for your brothers, that's all that really matters."

When you get down to it, I think human interaction is at the core of any Richard Linklater film. Now I understand that you could argue that human interaction is at the core of almost any movie, but it’s specifically Linklater who seems to construct almost every aspect of his movie in the way the characters speak, act and even refuse to speak/act around one another. It’s hardly a surprise that so many actors are eager to work with him, like the supremely talented trio at the heart of Linklater’s latest film, ‘Last Flag Flying’.


Thirty years after serving together in the Vietnam War, Doc Shepherd (Steve Carell), Sal Nealon (Bryan Cranston) and Richard Mueller (Laurence Fishburne) reunite for a different type of mission: to bury Doc’s son, a young Marine killed in Iraq. Forgoing burial at Arlington National Cemetery, the three friends take the casket on a trip up the coast to New Hampshire. Along the way, the three men find themselves reminiscing and coming to terms with the shared memories of a war that continues to shape their lives.


There are few filmmakers who have as deep a compassion for the characters they write than Richard Linklater, which evident from the very first scene of ‘Last Flag Flying’. The scene depicts two old friends reuniting in a shady bar, with a long standing respect and admiration for one another which is laced throughout the scene. But what’s also evident from this opening scene is that both of these men are dealing with their own trauma in their own way. It’s all conveyed through the way the actors present themselves, because much like Doc’s old comrades that help support him through this moment, Linklater knows the best time to just stop and listen.


This is a great achievement considering how ‘Last Flag Flying’ could have easily descended into melodrama or superficiality. Although at times it does fall a little too close to that territory, it uses sublime patience and nuance at exactly the right moments where a lesser film would feel the need to spell it out for the audience. So much emphasis is placed on the way the characters reminisce and share their lives since the war. What they choose to tell the others and wait until later to reveal. There’s a structure and development to their interaction that says more about their personalities than some contrived backstory ever could.


Not only that, but as ever with Linklater, the way they interact is through dialogue that feels both natural and engaging. It has a particular rhythm to it that entices us to listen but is also instantly recognizable and relatable as being between friends reuniting. There’s the obligatory catching up and awkward pauses at the start, but as they familiarize themselves with each other’s company they soon settle back into a camaraderie that conveys a sense of shared experience. This effect is done brilliantly through both the screenplay and the actors performances. 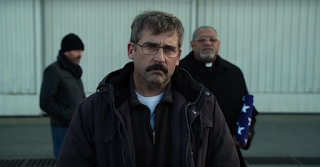 Sat the end of the day, despite the strong dialogue, I do think what makes ‘Last Flag Flying’ hit home are the strong performances from its three principle players. It goes without saying that Steve Carell has reason to be particularly downbeat of the three. Everything about Carell’s performance from the way he hold himself and the subtle ways he shifts in character whenever the subject of his son is brought up. He’s clearly carrying a great deal of pain but doing his best to remain reserved and strong. When he does finally let the emotions pour out it’s a cathartic experience due to the power of his outburst, but also how well it contrasts with the restraint he had shown prior.


One thing I haven’t mentioned is that ‘Last Flag Flying’ is an unofficial sequel to the Hal Ashby film ‘The Last Detail’ which starred Jack Nicholson. Though Linklater has changed the character names, Cranston is clearly an embodiment of Nicholson and it shows. He has the same pulsating energy and erratic tendencies, and like Nicholson he uses them expertly to convey a great deal about the character. He’s not constantly wired but he does use his levels of energy to display different emotions in a way that feels true to his established character. Better yet is that Cranston never comes across as imitating Nicholson, he’s a real embodiment of what the actor brought to the character in the first film and adapts it to the context of this one. Laurence Fishburne is also excellent, having the psychical stance of a reserved religious man, but loosing none of the passion from his younger days. That passion only becomes more evident as the film progresses and he spends more time with the friends of his youth, making his slow transition very fulfilling.


The film does make some missteps though. It can’t help but feel a little manipulative and contrived at certain times. Particular when the score tries to wean more emotion out of the audience because not only does it feel unearned, but it also undercuts the more honest current that the movie had first established. There’s also a number of moments of tone deftness where the film tries to add a sense of humour, which works sometimes but at others dissipates the drama that had been so expertly built up. It does such a good job at relying on its cast for most of its runtime, so I ask why it doesn’t trust them near the end.


Carried by a strong cast and only occasionally descending into melodrama, ‘Last Flag Flying’ is a gratifying and humane drama.