"We're here to talk AIDS prevention as the government won't."

More recently I’m making an effort to not look into the movies that play at festivals earlier in the year. When I see the list of competition entries for something like Cannes I tend to mark them down as a reminder to check them out when I get the chance but to no look too deeply into them because quite often it’s these kind of movies that are the most surprising in their content and presentation. With all that being said, I managed to tick another movie off my list from this year’s Cannes Film Festival.


Much like the rest of the world in the 1990s, Paris is undergoing a crisis in the form of the AIDS epidemic, both due to the disease and the public reaction. Nathan is a young man who joins an AIDS activist group. As he attends the weekly meetings, he learns that some members prefer a more radical approach to their protests.


Another thing that often happens with festival films is that they’ll be spectacular in one regard but flawed in another. That’s the situation I find myself in with ‘BPM’. When Robin Campillo’s film is at its best it’s an inspirational, intimate and innovative piece of cinematic brilliance. But then at other moments it, not bad per say, but just sort of forgetful. It’s easy to get caught up on those moments that really excel, but as a whole the film has some issues that prevent it from being a great movie in its own right.


At 140 minutes ‘BPM’ is a long film and often feels that way. The plot meanders around with various scenes and subplots that don’t seem to bear that much relevance on the main story or the development of the characters. Speaking of which, the characters themselves don’t have a great deal of depth to them, or at least not enough so that I felt invested in their dynamic or development. The screenplay does a decent job of distinguishing them with differing characteristics, none of which felt clichéd. But these personalities don’t feel like fully fleshed out characters that evolve or progress because the script doesn’t dig any deeper.


That being said, the cast all do a good job in bringing to life a group of people in a way that feels true to life. Rather than resorting to contrived melodrama, both the script and the actors take a more nuanced and realistic approach. The movie also does an excellent job of setting an environment. From the opening shots, the era of Paris in which ‘BPM’ takes place feels like its own character. A melting pot of culture that is caught at a crossroads of social unease. There’s a clear energy to the way Campillo frames the city, as if you’re there experiencing it all first hand. 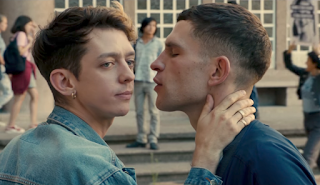 What you may find most surprising about ‘BPM’ is how well it strikes a varied tone. It incorporates humour and a degree of romance throughout, even in some of its most dramatic moments. Rather than having these moments of humour weigh down the movie it actually seeks to be a welcome improvement, partly because of how perfectly in tune with the film overall. But also due to how despite being based on true events I don’t think it thoroughly earned the drama it was trying to convey anyway, so the idea of making the movie even heavier in tone would have dragged it down.


The movie is at its best when dealing with the more intimate moments. Dialogue between a few characters is made to be incredibly engaging under Campillo’s unique way of directing conversations, love scenes strike a balance of tone that’s rare to see and there’s a wonderfully uplifting and inspirational through line to the movie. The movie understands in these scenes that it’s the dynamic between its characters that keep the audience invested and only places them in a larger context when necessary. But as I said earlier, it’s a shame the movie doesn’t develop these characters to a degree where I continued to empathise with them throughout.


Though the tone is brilliant, what really stops ‘BPM’ from becoming great is the pacing. At 140 minutes it’s a long movie, but from where I was sitting it really did not feel as if it needed to be that long. The plot felt repetitive at certain moments to a point where every other scene felt almost redundant given that it was essentially rephrasing something we had already witnessed. Either plot points, or character moments or thematic suggestions were all constantly recurring. That’s fine if you want to repeat a specific point, but with ‘BPM’ these moments of repetition started to spoil the film’s pace as it failed to cover as much ground as its runtime would justify.


Brilliant at times throughout but weighed down overall by some poor pacing and a lack of depth, ‘BPM’ falls a little short but is still passable.