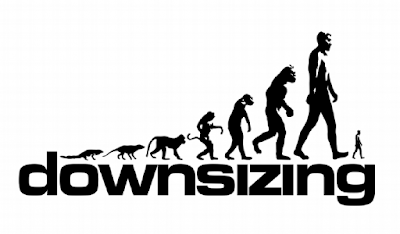 "Sometimes you think we're in the normal world, then something happens and you realise we're not."

When one really considers the films of Alexander Payne, none of them have actually been about their basic premise, or rather they are only about their premise when described on the most surface level description. ‘Sideways’ is about so much more than wine tasting, ‘Election’ has little to do with high school and ‘The Descendants’ goes far beyond the premise of a man whose wife was cheating on him. So, however interesting the premise of ‘Downsizing’ looks, it’s very likely to have almost nothing to do with the main movie.


When scientists discover how to shrink humans to five inches tall as a solution to overpopulation, Paul (Matt Damon) and his wife Audrey (Kristen Wiig) decide to abandon their stressed lives in order to get small and move to a new downsized community a choice that triggers life-changing adventures.


So it should come as no surprise that ‘Downsizing’ is concerned with commenting upon our own society while examining it through the lens of this unique science fiction premise, in fact you’d have to be a pretty incompetent storyteller to look at a premise like this and not see it as an excuse to do just that. The movie almost cements that right away as its plot focusses on the fact that the whole shrinking idea, though meant to benefit the future of humanity as a whole, is being used as a means for personal gain by almost everyone who sings up for it. Even our everyman protagonist Paul is motivated to take the plunge not out of some need to save the planet, but the knowledge that shrinking his assets will make him significantly richer.


So there’s the flaws of human nature, comfortable middle class backgrounds and literal miniaturised culture on display. If you were asked to come up with a set of concepts and themes for Alexander Payne to work with then you can’t do much better. Except it turns out that you can because depite aiming for several lofty themes and biting social satire, ‘Downsizing’ is a bitter disappointment from Payne, whose usual sharpness and nuance has been replaced by a meandering plot and allegories so unsubtle they might as well have called the movie “It’s about us, pay attention.”


Normally I can at least praise movies like ‘Downsizing’ for having ambition. But the route it undertakes is so simple minded and predictable that the movie can’t help but feel utterly generic. Putting aside the fact that every narrative beat in the movie is easy to spot from the outset, the whole angle ‘Downsizing’ takes with its commentary is completely devoid of any original ideas. All of this means that it comes as little surprise to discover that ‘Downsizing’ was originally conceived back in 2004 and written over the next few years. Its social message feels both clichéd and tired in the modern cinematic landscape. 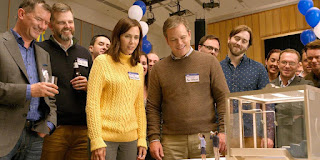 I think even Payne himself knows this as, contrary to what I said at the start of this review, ‘Downsizing’ seems far more interested in its basic premise than the themes raised by it. The best part of the film is the attention given to the details that craft out this miniature world. Payne strikes a good balance of comedy that is highly entertaining and left me excited over where the plot would go from here. The problem is that from there it sort of jogs in place. The narrative feels repetitive and the characters don’t develop in a way that feels fulfilling at all. Damon’s character does undergo an arc of sorts but it never felt earned or even that interesting given that it’s a story we have seen many times before.


It’s because of this thin writing that ‘Downsizing’ manages to waste its stellar cast. With no discernible characteristics other than “the guy you feel sorry for” and no fulfilling arc, Damon’s performance boils down to merely reacting to things around him. Other actors in the film like Christoph Waltz and Kristen Wiig are at least entertaining to watch, but there characters are almost deliberately one note. This would be fine if our lead was engaging, but he isn’t so I continually found myself looking for any other character I could at least empathise with only to be disappointed. The only one that comes close is that of Hong Chau but even then her character feels like more of a social point or narrative placement than an actual character, and that’s overlooking the stereotypical nature of both the character and Chau’s portrayal of her.


‘Downsizing’ is a disappointment on two levels. The first is that such an interesting premise feels utterly wasted here as it descends into obvious social metaphors, clichéd storylines and paper thin characters. The second is that it feels as if Alexander Payne has put aside what would usually be a fascinating character piece in favour of world building and jokes that quite honestly played better when cut in the trailer.


‘Downsizing’ is a social satire that lacks any sharpness, nuance or innovation.