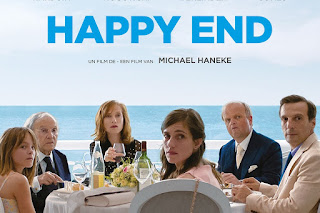 I think it’s surprising that Michael Haneke has never gotten the mainstream attention that so many other directors have. Granted, he’s widely acclaimed and then some, having won two coveted Palme d’Or awards. But I just feel like whenever I have a conversation about the best modern auteurs, his name seems to be overlooked a bit, even though he is clearly one of the best filmmakers working today. Haneke is provocative and meticulous in his craft, to an almost banal degree.


Anne Laurnet (Isabelle Huppert), the owner of a large construction firm, meets for dinner with her family who each have a whole host of issues. Her father George (Jean-Louis Trintignant) is suffering from dementia whilst her son has a drinking problem, and as a whole the family are completely oblivious to the world issues occurring just a short distance from where they are sat.


There’s a question of whether a director retuning to specific themes and stylistics that they have upheld throughout their career is a bad thing. On the one hand you could see it as a director evolving their work whilst staying true to their roots as well as creating a consistent kind of filmmaking. Another way of looking at it though is to take it as a sign that the director has stayed within their comfort zone rather than branch out. It’s a question I’m faced with after watching ‘Happy End’ because while I don’t doubt its craftsmanship, I’m not sure where to place it in Haneke’s oeuvre.


‘Happy End’ may not be a new direction for Haneke, but it represents his commitment to exploring that direction and the mastery with which he does so. That being said, he does find new ways to present his distinct style. Despite having a glossier surface than his other movies, Haneke still evokes his usual sense of existential dread and humanistic horror from the movie. In fact there’s almost a farcical quality to certain parts of the movie which serve to make the more disturbing aspects even more unsettling when shown in such stark contrast. The depravity of his characters is chilling to watch, and by framing the story through the lens of modern technology he adds a new element to proceedings again.


It’s actually remarkable to see said technology presented so flawlessly in the movie. One of the reasons why films often feel preachy when tackling the subject of social media is that they get the details wrong and subsequently undercut the message. It’s hard for me to listen to a lecture when the person speaking clearly knows nothing about the subject. But Haneke has obviously done his research into how these mediums work, how they affect human interaction and has rendered them as cinematic entities.


There’s certainly a more clinical approach to presenting the characters in ‘Happy End’ than one may expect. But that form suits the movie very well, reflecting the way its characters view the world around them. But despite this distant view the movie never feels unengaging. Part of this is due to the palpable tension that’s clear right from the start. The whole family feels like a simmering substance ready to explode. Haneke’s perfect framing and flawless compositions also help to give the movie a sense of visual intrigue. 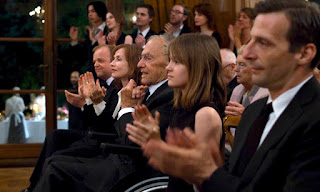 When that tension does finally boil over its surprisingly low key. Though all of his films have been intimate, ‘Happy End’ feels like Haneke well and truly garnering the horror in the kind of depravity you’re likely to witness every day. Whether it’s down to genuine malice or just a lack of empathy, the characters of this film will undoubtedly make your skin crawl with their relatively minor actions. The fact that they are framed against the backdrop of a refugee crisis only makes their plights seem more insignificant and more infuriating as a result.


What makes the desperation of these characters all the more involving is the terrific performances from the cast. I know it’s hardly worth saying but Isabelle Huppert is fantastic. She plays her character with a clear human streak that puts her warped morality into perspective, whilst never letting the audience see her as a pure antagonist. Jean-Louis Trintignant probably has the most empathetic role, but even that is struck by a sense of desperation that almost makes his presence painful to watch. There’s a spent out nature to his movement and speech that constantly affirms his situation to the audience and never gives them a chance to look away.


Michael Haneke always tries to ensure that the conversations surrounding his films continue well after they have ended and that is most definitely true of ‘Happy End’. It’s final narrative beat in particular will leave you with a sense of emptiness that few films can replicate. It may be a little derivative of his previous work but it’s also less flamboyant and almost more disturbing as a result. The premise for any Haneke movie before this would make high drama and heartbreak seem like a given. But in ‘happy End’ he takes the mundanity of modern life and makes it utterly deplorable, as well as unforgettable.


Though it’s not new territory for Haneke, it’s a region he still explores with mastery and complete control of his craft.