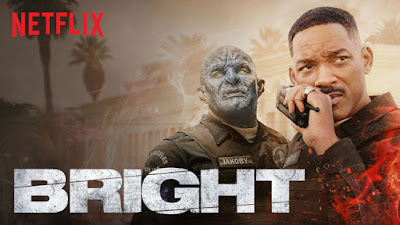 "All of the races are different, but just cos they're different doesn't mean anybody's better or worse than anyone."

Like any major studio, Netflix have done a good deal this year to branch out. They spent a lot of 2017 trying to weigh in as an artistically droven studio that helped distribute the films of gifted auteur directors like Bong Joon Ho and Noah Baumbach, as well as signing up to release the upcoming projects of Martin Scorsese and Alex Garland. But also like any major studio, there’s a cruel irony in that their most popular movie is likely to be their worst, a point proven by ‘Bright’.


In an alternate present where humans and fantasy creatures have co-existed since the beginning of time, human LAPD officer Daryl Ward (Will Smith) and Orc rookie officer Nick Jakoby (Joel Edgerton) embark on a routine neighbourhood night patrol and discover a powerful ancient artefact that was thought to be destroyed. They soon encounter a darkness that will ultimately alter the future and their world as they know it.


The general premise of ‘Bright’ might make it sound like a distant relation to ‘Men in Black’ (and not just for Will Smith), a police force existing in the realm of the supernatural, pairing two contrasting characters together, even with the same ancient artefact McGuffin. Like any bad movie that’s similar to another one you love, the most you can give to the bad film is that it makes you appreciate the similar movie that you love even more for all that it does right. The world of ‘Men in Black’ may be comedic, but it also felt real and tactile, with rules that were stressed for their importance just as much for their comedic value. It was also all explained to the audience in a way that felt natural to the plot, none of which applies to ‘Bright’.


As a screenwriter, I often find that Max Landis puts more weight into ideas than characters. I don’t doubt that he gives some of the best pitches for a movie in Hollywood, but therein is part of the reason. They are movies that are easy to sell on concept alone, so as a result never seem to develop beyond that initial concept. There’s nothing within the narrative or characters of ‘Bright’ that justifies its central concept. In other words, you could copy and paste the overall plot of this onto any buddy cop movie with some minor tweaks, and you’d have the same movie save for the small surface details. The only benefit of this fantasy world are some painfully obvious social metaphors that quite frankly were better explored earlier this year in the ‘Tales From the Citadel’ episode of ‘Rick and Morty’.


But as well as never applying its central premise to any unique degree, ‘Bright’ also fails in being a socially relevant film as it’s social concept holds a higher status within the movie than anything else. It seems so concerned with projecting this idea of it being a nuanced social commentary that it forgets to work as a compelling film in of itself. That’s an issue that also falls to director David Ayer, whose direction never alludes to a world larger than what we’re being presented with, even though the entire narrative hinges on the idea that we do. At no point does this feel like a world in which we become used to, or spend adequate time in to care about. 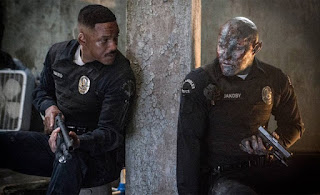 The only thing that’s flatter than the world in which ‘Bright’ takes place are the characters that inhabit it. The McGuffin driven narrative leaves little room to explore these characters, creating a buddy cop formula that ultimately fails to even establish or distinguish its main characters. It’s a shame given that both Will Smith and Joel Edgerton seem more than capable of bringing two likable characters to life, ones that would have a good dynamic at that. But much like the movie around them, the script is more concerned with having the characters represent a social metaphor or just spout exposition.


I never thought I would have to call a movie like ‘Bright’ pretentious, but that is exactly the word I’d use to describe it. The movie wants to endow itself with social relevance before it’s even earned the right to be considered as such. It makes not only for a movie that feels tired and predictable, but one that is so tonally confused and I have to say, pretty boring. When it’s not hiding behind it’s obvious metaphors it’s bogging the audience down by explaining its convoluted and nonsensical mythology. Rather than disperse this information throughout the movie, it’s all pushed towards the first act, a time when we should be connecting with the characters so that we’re invested in their actions later on.


It really is a shame because when ‘Bright’ gets to it’s bigger set pieces it’s not half bad. Though it is still over the top farce trying to masquerade as self serious drama, it’s still engaging and decently directed. But at the end of the day I simply don’t care, not about the world, nor the characters, or anything really.


‘Bright’ is a convoluted and self-important bore, a movie that tries to accomplish step 476 before getting past step 1.