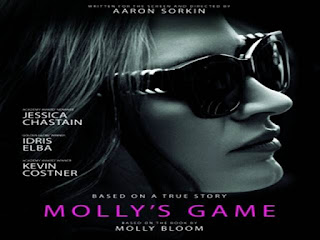 "I'm Molly Bloom. Do you know about me?"

A new Aaron Sorkin script is always going to be an event. To bask in the richness of his dialogue, the efficiency of his construction and the outright mastery of his storytelling is always a treat. But there is a certain curiosity towards ‘Molly’s Game’ over why Sorkin chose this to be his directorial debut. Was there something extra special in this script that his other masterpieces like ‘The Social Network’ and ‘Steve Jobs’ lacked? It’s an intriguing thought to say the least.


Having run some of the most high stakes poker games for the rich and famous for over a decade, Molly Bloom (Jessica Chastain) suddenly finds herself the target of an FBI investigation as they demand to know the details of her underground empire. With her lawyer Charlie Jaffey (Idris Elba) as her only ally, Molly must fight to maintain her principles and go up against the forces trying to wean information from her.


It should come as no surprise that an Sorkin script doesn’t feel its length at all. Despite being nearly two and a half hours long, ‘Molly’s Game’ seems to go flying by due to Sorkin’s brilliant command of pace and structure. It has any number of impressive scenes that allow it’s talent to (for lack of a better word) show off with eloquent speeches or snappy dialogue. But despite this Sorkin injects a sense of flow to the script that allows the movie to progress naturally. It never sags or feels padded, but rather moves forward with great pace that indulges the audience while efficiently taking them through this story.


I also understand why Sorkin chose this script to make his directorial debut. Though as a director Sorkin lacks the tightness of David Fincher or the style of Danny Boyle, he seems to understand that unlike the scripts helmed by those directors, the script for ‘Molly’s Game’ didn’t require those elements. This script simply needed a director who completely understands its function and who better than the person who wrote it? Each dramatic moment hits with full force because Sorkin knows when to emphasise them, and though you’re hanging on to every word of dialogue the movie is free flowing enough that it never feels exhausting. He also has a consistently good editing pattern and shot ratio to keep these fast conversations clear and concise.


That being said, I think the film could have benefited from adding a few stylistic touches here and there. There are a few scenes that I could point do as being, not necessarily bad, but lacking a certain visual flair that would have made them more engaging. As I said earlier, for the most part ‘Molly’s Game’ is plenty engaging enough, but every now and then I found myself noticing a scene that leaned more heavily towards function than form rather than striking a perfect balance of the two.


But, astonishingly in this Aaron Sorkin movie, the person I find myself raving about the most isn’t Sorkin. It’s actually Jessica Chastain. In what could be the best performance of an already illustrious career, Chastain perfectly embodies a quality that Sorkin particularly loves in his writing. Whether it be Steve Jobs or Mark Zuckerberg, Sorkin likes writing protagonists who keep their motives a secret and hide their inner emotions. One could say he likes characters who keep their cards close to their chest, and would you look at that, here is a characters who literally keeps her cards close to her chest. 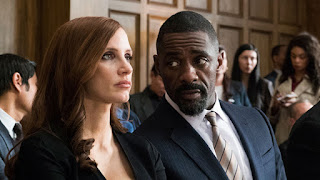 Chastain strikes a perfect balance of allowing us to see into Molly’s psyche enough so that we can empathise with her but also making us doubt the validity of everything she says. She embodies strength and principle but also shows enough vulnerability for there to be suspense over whether she can hold her own against her prosecutors. It’s a difficult balancing  act at the best of times, but to do it when the dialogue is as sharp and as quick witted as it is here is another thing entirely. Most actors would be tempted to just revel in the fluidity of Sorkin’s dialogue and make their character seem impervious as a result. It takes a special kind of talent to find both the strength and weaknesses of a character in this kind of dialogue, and bring that to the forefront in every scene.


The rest of the cast also do a fantastic job. Much like the audience they have to piece together who Molly Bloom is. But unlike the audience they have to find a sense of development to that investigation and stand next to the towering performance of Chastain, which they all manage brilliantly. They all do an excellent job in portraying their characters flaws and weaknesses whilst showing their strength and resolve throughout. Whether it’s Idris Elba, Chris O’Dowd, Kevin Costner or Michael Cera, none of them get lost in the crowd.


Though the movie occasionally suffers from feeling a little distant, as if every now and then it strays into talking about the ideas each character represents rather than the character themselves, there’s still a strong emotional through line to underpin it all. ‘Molly’s Game’ may be sprawling in runtime and epic in ideas, but its scope and focus is actually very intimate, which is an unusual contrast for this kind of drama. There are few screenwriters who could pull off such a feat, other than, well I think you know by now.


Boasting a number of terrific performances including a masterclass from Jessica Chastain, ‘Molly’s Game’ is an engaging and epic drama that ranks alongside Sorkin’s best work.