"I'm trying to do the impossible for the ungrateful."

Given that ‘Nightcrawler’ was one of my favourite movies of 2014, I’ve been waiting patiently to see what Dan Gilroy’s second directorial outing would be. I admit to being a little surprised and disappointed when I found out as a historical legal drama since seems oddly pedestrian for the director whose debut was one of the most unconventionally thrilling movies of the past decade. But with Denzel Washington in a starring role I remained hopeful that there would be something worthwhile within it.


Set in the underbelly of the overburdened Los Angeles criminal court system Roman J Israel (Denzel Washington) is a driven, idealistic defence attorney who is recruited to join a firm led by one of his late mentor’s former students, the ambitious lawyer George Pierce (Colin Farrell). He soon begins a friendship with a young champion of equal rights (Carmen Ejogo) as a turbulent series of events ensue that will put the activism that has defined Roman’s career to the test.


The problem that often arises with legal dramas like this is that when they are not executed correctly they can become movies which are solely memorable for its central performance, with nothing else being remotely intriguing or thought provoking. It brings me no pleasure to say that ‘Roman J Israel, Esq’ is that kind of movie. Denzel Washington is terrific (as he always is) but the film around him is far less impressive and has such a lack of substance that it actually starts to hinder its only saving grace.


I might as well address the positives at the start. The performances in the film are, as I already said, highly engaging. Washington manages to embody a role unlike anything he’s ever undertaken before. It’s much more introverted than the roles that have garnered him the most acclaim, but is punctuated by idiosyncratic tendencies that instantly establish what kind of person Roman J Israel is. He’s withdrawn and reclusive but no less passionate about the movement he represents than the loudest speakers. One of those loud speakers is Colin Farrell who is also terrific and makes for a good dynamic alongside Washington.


It’s these strong performances that lead me to believe Gilroy intended ‘Roman J Israel, Esq’ to be another character study with an underlying slice of social commentary much like his debut. But the film doesn’t pan out that way as it meanders across various plot threads and seems very tonally confused to say the least. It picks up new narrative threads but then never resolves them, and worse still most of them don’t have any impact upon the central character. They don’t change his outlook, provide an answer to his motivations or justify any actions he carries out later in the movie. It seems as if they just exist to fill up time. 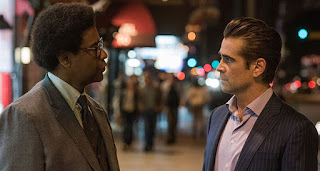 I might be able to forgive the film had any of these subplots been interesting, they’re not. Every detour this movie takes are unengaging and frankly boring. Gilroy crafts the origins of a great character study, and has an actor fully capable of not only portraying that character but also developing him, only to squander it with a series of incoherent ideas that never seem to meld together into a fully functioning whole.


What is even more frustrating is that I can see the where the film could have gone to redeem itself, in fact it looks as if it’s about to do so on several occasions but then falls back into its string of contrived conventions. The way Roman’s character is set up would lead you to believe he was about to be presented with some moral conundrum that would force him out of his comfort zone. But instead the narrative ploughs on without any sense of urgency or importance. It’s poor structure and pacing don’t help either as the movie brings up various plot threads before dropping them until its most convenient to reintroduce them.


Considering Gilory made such a huge impression as a director with his first feature, the overall look and mood of ‘Roman J Israel, Esq’ falls somewhat flat. In Nightcrawler Gilroy created a highly immersive atmosphere as he rendered the streets of Los Angeles as a neo soaked hell scape. It had such great versatility and distinctiveness that made the movie feel like a modern noir. But here, the direction doesn’t feel particularly provocative or immersive. It’s competent at least but never distinct from the look that a dozen other legal dramas also have. Even Robert Elswit’s cinematography seems to lack its usual cinematic flair. Once again, it’s not a visual style I would necessarily call bad but it certainly fails to live up to expectations considering the past work of the talent involved.


Aside from a strong performance by Denzel Washington, ‘Roman J Israel, Esq’ is a meandering, disappointing mess.