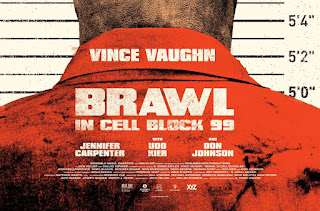 "I'm not gonna tell you anything you don't want to hear, and prison will give me plenty of time to loom at guys I don't like."

You would be hard pressed to not be at least remotely sceptical over the prospect of seeing Vince Vaughn in a dramatic role. Even at his best the actor was more renowned for comedic roles, which is not to say one is better than the other but the transition between them requires a specific skill set, I’d say the closest he got to drama playing Norman Bates was Gus Van Sant’s remake of ‘Psycho’ and….yeah. Cut to a string of increasingly disappointing comedies later and here we are.


Bradley (Vince Vaughn) former boxer loses his job as an auto mechanic, and his troubled marriage is about to expire, leading him to enter the drugs trade. He soon finds himself in a gunfight between police officers and his own ruthless allies. When the smoke clears, Bradley is badly hurt and thrown in prison, where his enemies force him to commit acts of violence that turn the place into a savage battleground.


I will say that if any modern director has the capability to completely surprise me, then that is very likely to be S Craig Zahler. His previous film, ‘Bone Tomahawk’ began as a western only to do a complete 180 and become a fully-fledged horror movie, and a damn scary one at that. In a similar genre bending fashion, ‘Brawl in Cell Block 99’ starts as an underground crime thriller before morphing into the brutal punch-up it becomes. It’s amazing how Zahler manages to avoid making that jump feel disconcerting. If anything the tonal shift feels natural and outright welcome. After an hour of patient storytelling and character building, to see all hell break loose feels like some great cathartic release.


Though this first half does suffer from some pacing issues, it’s worth it to see the film completely cut loose with its second half. Brutal almost feels like an understatement when describing its scenes of violence as we don’t just see the act itself in all its glory, but we see the long and painful repercussions of it. People aren’t killed quickly, the die slowly and messily. We see the toll this takes on those who have killed them as injuries mount up and the sheer endurance of their task becomes an obstacle in of itself. It’s made all the more obvious due to Zahler’s tendency to keep his actors bodies on full display during the fight scenes so as to constantly remind us of their increasing injuries. 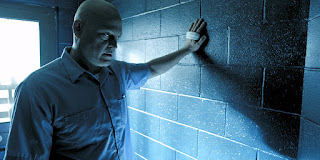 But this level of detail carries over into every aspect of the filmmaking. Zahler wants to make the world of his movie feel versatile and lived in, that much is obvious, but he takes it a step further by applying those details in a way that enrich the characters as well as the story. We feel the hopelessness of this situation through the smallest touches in the environment, from the way the characters present themselves and how they interact with one another. It even works to endear us to those characters. It’s hard not to have sympathy for Bradley as he’s clearly painted as a martyr kind of protagonist, suffering in silence because it’s the lesser of two evils.


On the subject of that main character, Vince Vaughn is fantastic in the role. There is a distinct level of humanity to him that creates a level of empathy and Vaughn makes the most of that during the movie’s quieter scene. But when he really needs to throw his weight around he does that excellently as well. Zahler manages to frame Vaughn’s tall stature in a way that makes him feel more physically menacing than one would first think. He fully commits to the fight scenes as well, bringing a great weight to them as his presence is keenly felt. The fact that Vaughn’s casting is so against type make the moments of violence feel even more jarring than they already are.


But anyone (well not anyone but you know what I mean) could compose some decent fight scenes with a pulp-ish edge. What makes ‘Brawl in Cell Block 99’ stand out is the way it radiates with sheer energy. It’s not hyper stylised, in fact it’s the realism that gives the movie a distinct quality, but the way Zahler has constructed the story allows it to feel like a shot of adrenaline once it gets underway. He gives each fight scene a consistent visual style so that they build upon one another rather than just feeling like an endless stream of set pieces. In some ways I could liken it to Gareth Evans’ direction for both of ‘The Raid’ movies and though this film never reaches that level of utter mastery it’s certainly good enough to feel reminiscent of it.


Completely brutal and utterly deranged, ‘Brawl in Cell Block 99’ is an effective pulp story that gives Vince Vaughn one of the best performances of his career.