"There's potential for catastrophic weather events on a global scale, a Geostorm."

One would think that after Roland Emmerich’s ‘2012’, people might accept that as a genre, disaster movies are a little dumb. That’s not to say there haven’t also been some truly phenomenal ones (check out J.A Bayona’s ‘The Impossible’) but on the whole it boils down to a guy running away from a lot of CGI effects, inexplicably surviving for way longer than he should in this convoluted catastrophe. Yet here we are.


After an unprecedented series of natural disasters threatened the planet, the world's leaders came together to create an intricate network of satellites to control the global climate and keep everyone safe. But now, something has gone wrong: the system built to protect Earth is attacking it, and it becomes a race against the clock to uncover the real threat before a worldwide geostorm wipes out everything and everyone along with it.


It’s rare that a movie’s premise sounds as inexplicably dumb as that of ‘Geostorm’ (Gerard Butler runs away from bad weather) but it’s even rarer for the actual movie to be even more idiotic than said premise. I’m not sure what’s more baffling about ‘Geostorm’, the fact that its makers added plot points that are so ludicrous or that everyone within the movie takes these plot points absolutely seriously. You know things are bad when the movie begins with Gerard Butler being introduced as the smartest scientist in the world and that’s the least implausible thing in the film.


There is nothing inherently wrong with a big, dumb disaster movie. But in the case of ‘Geostorm’ it thinks itself as a film in which we’ll also be invested in the depth of its characters and the tightness of its political commentary. Obviously the movie doesn’t actually contain either of those things but it thinks it does and therefore it’s certain that the audience will as well. After all, where else could you see the compelling plot line of “man abandons his family to go on a dangerous mission to save the lives of many” before? We keep being told about the importance of these characters and events without ever actually seeing either of those things.


But aside from failing to evoke any empathy out of the audience, these failed attempts to do so make the movie so tonally jarring. We go from a scene that attempts to be one of intimate family drama to another of a giant CGI tornado wiping out a city. It isn’t even consistent in terms of what kind of disasters it’s showing. There is a subplot about kidnapping the president of America which culminates in a car chase while the world around the cars falls apart and crumbles. It feels like an entirely different movie was edited into the middle of this. Then at another point the movie turns into a bad knockoff of ‘Gravity’, only without the inventive camera movements and ground-breaking special effects. So basically just CGI nonsense followed by more CGI nonsense. 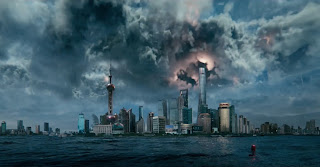 ‘Geostorm’ doesn’t even feel like a disaster movie in its own right. It feels more like the knock off B-picture released a year after a much more successful and superiorly made movie. But in this case that superior movie is something like ‘2012’ or ‘Independence Day: Resurgence’. It comes as no surprise that the director of ‘Geostorm’ wrote and produced most of Roland Emmerich’s disaster movies, and now his directorial debut feels like an even paler imitation of those. There literally isn’t a single element of this movie that you couldn’t find in a different film, but executed in a way that makes it infinitely better.


It also comes as no surprise that Gerard Butler performance is identical to every other Gerard Butler performance. He plays the loud, obnoxious guy who would be insufferable to meet in real life but because this is a movie we’re told he’s the hero. The only difference is that this time the movie itself is so oblivious to how idiotic it is that it thinks it can have other characters call Butler a scientist and we’ll somehow believe that. Even the most idiotic fictional techno jargon seems to sound especially farfetched when it’s Butler saying it straight to the camera.


But the worst crime of all might be that ‘Geostorm’ doesn’t even commit to its own stupidity. Aside from a few scenes of weather destruction that we get to see play out at length, it’s mostly just a series of quick snippets that I can only assume were limited in time due to the effects budget. All of this is without getting into how its lengthy production schedule and multiple re-shoots really show, as characters feel woefully underdeveloped (by which I mean underdeveloped even by this movie’s standards) and subplots feel all too quickly resolved.


‘Geostorm’ is dumb in a way that few other movies are and isn’t even smart enough to realise.