"The only thing we know for sure, is that he's playing games with us."

I feel like I’ve been sucker punched here. For many months I was relatively indifferent to the upcoming adaptation of Jo Nesbo’s bestselling mystery novel. But upon hearing that it would be directed by Thomas Alfredson, director of the modern horror masterpiece that is ‘Let the Right One In’ the movie shot straight to the top tier of my most highly anticipated movie list. Now that I’ve seen it, well as I said, I feel sucker punched.


For Detective Harry Hole (Michael Fassbender), the death of a young woman during the first snowfall of winter feels like anything but a routine homicide. His investigation leads him to "The Snowman Killer," an elusive sociopath who continuously taunts Hole with cat-and-mouse games. As the vicious murders continue, Harry must lure the madman out of the shadows before he can strike again.


I’d say the most essential rule for any mystery thriller is that the narrative needs to feel involving. You can enrich with masterful filmmaking, complex characters and various twists in the plot, but if that initial mystery fails to grab me then it’s an uphill battle from there. ‘The Snowman’ lacks this central ingredient, as well as everything else I mentioned earlier. So the idea of feeling even remotely involved in the story is next to impossible. There’s no intrigue or urgency to the plot, nothing to draw me in and instead I became so bored that I began to see the central ridiculousness of building an entire snowman every time you kill someone. I mean if I want to escape a crime scene I don’t want the hassle of building an entire snowman before I leave, right?


It really is baffling that a film with as much talent behind it as ‘The Snowman’ could be this disappointing, especially since those disappointments come in the areas in which said talent usually excels at. The film was edited by Thelma Schoonmaker (or at least it was in part, as there are two credited editors which in light of the final product is not surprising) who as well as directing half of Martin Scorsese’s filmography (winning three Oscars for her work on ‘Raging Bull’, ‘The Aviator’ and ‘The Departed’). But the editing here is so muddled and unfocussed, never conveying a sense of urgency to the events as they play out or drawing any kind of larger structure from which we can see the film’s deeper meaning.


This may be the result of half of the movie feeling obviously reshot. I don’t have any actual evidence to base this on, but several cast members looked noticeably different in certain scenes, due to differences in hairstyling or makeup, as they did to others. It would also explain why the movie feels so radically offbeat on a tonal level. It’s very obviously a piece of construction that hasn’t come together. The movie even seems to be changing its priorities every few scenes, sometimes being obsessed with pushing the plot forwards and sometimes attempting to develop its characters but never is this carried out simultaneously. It’s as if each scene could only convey one aspect at a time. 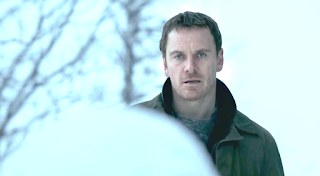 The talent behind the lens of ‘The Snowman’ is only equalled by the talent in front of it, but the cast feel similarly wasted. Whether it’s Michael Fassbender looking as if he’s sleepwalking through half of the movie, never capitalising on the supposed inner pain of his character even though he’s done that brilliantly in other roles like ‘Shame’, ‘Steve Jobs’ or hell even as Magneto in ‘X-Men: First Class’. Rebecca Ferguson and Charlotte Gainsbourg are treated like props as the movie never even tries to see them as fully realised characters. But worst of all, they made JK Simmons boring. I didn’t even know that was humanly possible to do until I saw this movie!


I could at least praise the cinematography as it renders the snow covered landscapes as an eerily pretty setting from which to stage this kind of crime drama. The images are, on the whole, well composed and occasionally highly interesting on a visual level. But even then the film comes across as being too tame to convey the weight of its own subject. I understand that sometimes restraint can be just as effective as a means to frighten your audience but the absence of violence in ‘The Snowman’ comes across less as a deliberate decision and more of being afraid to delve into the darkness of itself. It can’t grasp any broader meanings behind these killings, which would be fine if it was a character driven piece but it’s clearly not that either. What makes the whole thing more infuriating is that we know this director do both of these things because we saw him do that perfectly in ‘Let the Right One In’.


Bland and uninteresting, ‘The Snowman’ fails as both a character drama and as a dark mystery thriller.