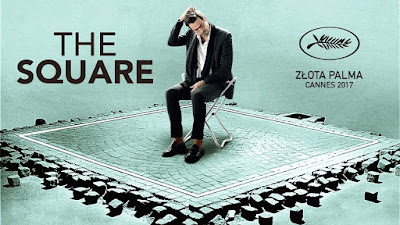 "The Square is a sanctuary of trust and caring. Within it we all share equal rights and obligations."

Even at the vast distance from which I saw this year’s Cannes Film Festival as it unfolded, it seemed to come as quite a surprise that the coveted Palme d’Or. Granted reviews were mostly positive but it seemed as if few industry commentators and critics had picked this as a frontrunner for the festival’s top award. The few contenders that I have seen include ‘Good Time’, ‘The Beguiled’ and ‘The Meyerowitz Stories’ and they were all very strong so Ruben Ostlund’s film has a lot to live up to.


In the aftermath of the abolition of the Monarchy of Sweden, the Stockholm Palace has been converted into an art museum. Christian is a curator at the museum, who finds his progressive world view shaken when his mobile phone is stolen. While managing a space set to show a new installation piece, he finds a public relations company to promote the installation, creating a great deal of chaos.


All of that being said, I was intrigued to see Ostlund’s latest film without any doubt. His previous film ‘Force Majure’ was not only a darkly hilarious and surprisingly complex movie, but one that also ranked among my favourites of 2014. It was an intimate movie that tackled broad and highly existential themes. ‘The Square’ is still very ambitious in the themes it tackles but perhaps lacks tne personal touch that made ‘Force Majure’ as compelling and involving as it was. Ostlund’s commentary on art, its meaning and place in society is more of a sprawling epic, one that is as surreal as it is mesmerising.


I’d say the strongest aspect of ‘The Square’ have to be its visuals. With Ostlund’s use of long, Steadicam shots to capture his perfectly composed environments the film is extremely interesting on a visual level. Though the scenes of high urgency are few and far between, they still carry such a great sense of elegance to them that makes even the most surreal moments feel perfectly in tone with the more meditative ones. It also helps that the film has many interesting pieces of art to observe and ponder over as it takes us through the guided tour of its own surreal world.


Not only are these scenes well made but they are also highly entertaining. Many of them have a similar comedic undercurrent to that of ‘Force Majure’ in that the humour is subtle enough to be enjoyed whilst never interrupting the flow of the scene or overshadow the movie’s main message. The dynamic visual style turns even simple conversations into highly interesting spectacles and when the movie does want to showcase a greater sense of visual flair it well and truly goes all out. These select scenes are engaging and entertaining and when taken as individual pieces of cinema definitely rank amongst some of the most impressive filmmaking I’ve seen this year. 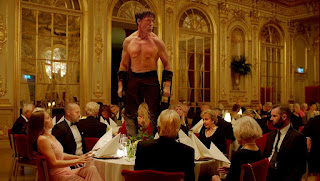 But sooner or later these scenes have to be analysed as more than just individual set pieces. Eventually they have to be taken as part of a larger whole and therein lies the problem with ‘The Square’, it doesn’t really do that. As impressive as these set pieces are they never really add up to form a cohesive, structured narrative. Even if it failed to that, had the film had any meaningful substance within it then I could overlook the lack of structure but in this case the movie feels like it’s wandering through several different topics without ever finding any resolution for any of them.


One could make the argument that the lack of meaning is in itself the film’s meaning, which is a valid interpretation. I certainly couldn’t deny that everything in the movie felt incredibly purposeful as it most certainly did. But I also couldn’t deny that the movie also felt somewhat pretentious as there was plenty of that to go around as well. The problem lies with the fact that what little purpose the movie has is far from ground breaking or original. Ostlund’s film is keen to bring up a lot of ambitious themes but rarely wants to actually explore them to any great degree. As the movie ploughed on the impressiveness of the scenes started to diminish as I gradually came to realise that the film wouldn’t incite meaning into any of them.


Of course, it’s not essential for a movie to have a deeper meaning in order to enjoy it, but when it is as high minded and unwaveringly ambitious as ‘The Square’ I expect something a little bit more complex than random, unstructured spectacle. It also doesn’t help that tonally the movie never quite ties itself together as it drifts up the spectrum of moods ranging from absurdist comedy to genuine moments of horror. I will say that I highly doubt I’ll see anything else like it for a while.


‘The Square’ biggest success and biggest failure is its sprawling ambition and lack of cohesive meaning.