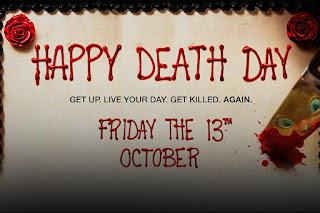 "The way I see it, you have an unlimited amount of lives. Unlimited opportunities to solve your own murder."

So is ‘Groundhog Day’ its own kind of genre now? This year alone we’ve seen three movies in which the main character is caught in some kind of time loop that forces them to repeat the events of the day until they come to a revelation that will solve the problem in their life. There was ‘Before I Fall’ which I did see eventually and was left with a though roughly “meh” reaction. ‘Naked’ which I didn’t see because Marlon Wayans is the lead and….no I feel like that’s a good enough reason. Now there’s ‘Happy Death Day’.


Tree Gelbman (Jessica Rothe) is a blissfully self-centered collegian who wakes up on her birthday in the bed of a student named Carter. As the morning goes on, Tree gets the eerie feeling that she's experienced the events of this day before. When a masked killer suddenly takes her life in a brutal attack, she once again magically wakes up in Carter's dorm room unharmed. Now, the frightened young woman must relive the same day over and over until she figures out who murdered her.


Snarky intro aside, as premises go ‘Happy Death Day’ isn’t a bad one. The idea of being able to deconstruct a slasher movie through this sense of repeated patterns and occurring tropes is an interesting concept. Of course, it was already done 20 years ago in ‘Scream’, and much more effectively but…the killer in this one has a different kind of mask…that isn’t even remotely scary. But maybe that’s not fair, because despite being of a similar self aware tone to ‘Scream’ I’m sure there’s plenty of opportunities for ‘Happy Death Day’ to distinguish itself.


There’s little doubt that this is a very commercial horror film. It limits the amount of genuinely scary scenes (to none at all in fact), severely limits the violence and ramps up the comedic aspects. None of this is necessarily bad providing that it’s what you set out to do. But ‘Happy Death Day’ constantly feels at odds with itself and repeatedly resorts to the cheapest tactics to block any sense of gore or bloodshed. The scene will be playing out like a straight horror movie (albeit a rather ineffective one) but will then awkwardly cutaway as the payoff happens. It’s a shame because for the most part these scenes are decently directed, but even before the end they are defused by the movie constantly feeling the need for force comedy where it doesn’t belong.


Normally with these kinds of movies I tend not to get caught up in the semantics of how precisely the whole time loop thing works or the exact mechanics of it since each movie makes its own rules. However, I would also expect said movie to be consistent to those self-established rules and adhere to them.  Maybe I could forgive them breaking the rules once or twice if they’re desperate for a happy ending (looking at you ‘Edge of Tomorrow’) but the way ‘Happy Death Day’ places such stress on the importance of the rules surrounding its own narrative, as well as how regularly it breaks them is something I have to bring up. 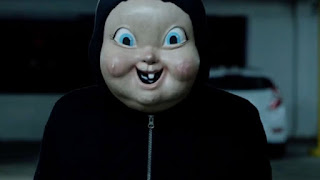 For starters the movie throws up plenty of logical ways in which the protagonist could potentially escape the killer or discover its identity. But she makes one mistake and then completely abandons it in favour of a new approach. But all the while I’m asking myself “Why don’t you just go back to the other tactic and remember not to screw it up in the way you did last time?” At least show why such an option isn’t available or come up with a better reason for abandoning it completely other than just “She forgot to lock the door so the killer could sneak in”. Just remember to lock the door this time!


As I said, normally I wouldn’t mind so much but the movie uses its own rules as a way to affirm various plot points when it’s already broken those very rules a dozen times. It disregards any sense of time or location in one scene but then treats them as absolute consistencies in another. As I said before, I’m with doing one or the other but be consistent in how you present your narrative. Don’t take the lazy way out and bypass something just because it suits the script.


These inconsistencies even spread to the characters, with each cast member struggling to pin down a cohesive arc for their character as their attitudes seem to be changing with each time loop. To make things worse once the central mystery is uncovered I defy anyone to actually argue that the movie makes sense. Leaps in logic are one thing but this conclusion simply makes no sense and in the context of the movie makes everything infinitely more difficult to believe.


‘Happy Death Day’ is a completely disposable movie that could probably be enjoyed by someone who’s never seen any of the various films that it’s similar to.