The Mountain Between Us

"We might die together and I don't even know you."

I guess ‘The Mountain Between Us’ is going to be that annual movie in which I’m a huge fan of the cast but when you get down to the basic premise of the movie itself I could take it or leave it. I always feel like survival stories need a bold creative voice to bring them forward, people like Robert Zemeckis with ‘Cast Away’, ‘Alejandro Inarritu with ‘The Revenant’ or Danny Boyle with ‘127 Hours’. See I’m already listing a bunch of movies I would rather watch as opposed to survival movie #246.


Stranded on a mountain after a tragic plane crash, two strangers (Kate Winslet and Idris Elba) must work together to endure the extreme elements of the remote, snow-covered terrain. Realizing that help is not on the way, they embark on a perilous journey across hundreds of miles of wilderness, pushing each other to survive and discovering their inner strength.


So despite what I said at the start I think there is definitely some potential to the premise of ‘The Mountain Between Us’. By making the survivalists strangers to one another it injects a possible sense of intrigue to the plot which could be used to good effect as we unravel their backstories and identities whilst also fighting for survival. There’s just one problem, this movie doesn’t do any of what I just said. Instead we find ourselves watching two actors stumble across a mountain where the danger of their situation never feels overbearing and their actual characters seem awkwardly placed next to one another.


There’s very little about ‘The Mountain Between Us’ to act as a hook to draw anyone in. Nothing within the movie heightens our empathy with these characters, nothing makes their situation feel vital to their character development and nothing comes close to convincing us that they should be romantically linked. As good as Winslet and Elba are, they don’t share much chemistry on screen as their characters feel utterly uninvolved from one another. Their characteristics don’t complement each other as they are never defined to an extent to which they feel unique. 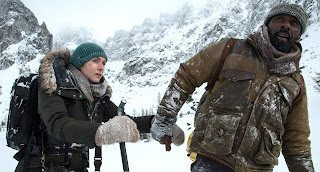 It’s actually surprising that the film is this mediocre, given that its director is Hany Abu-Assad who gave us two politically relevant (and Oscar nominated) films in the form of ‘Omar’ and ‘Paradise Now’. In those films he did a remarkable job of making the premise feel intertwined with the nuances of his characters. But here the characters and plot feel completely irrelevant to each other. They move forward with each when it’s convenient for the script, not when it feels integral to the story they want to tell. The fact that the movie has no real structure and just degenerates into an endless slog through snow makes it even worse. Then there’s the pacing which is also non-existent. There’s never any urgency to a scene but nor is there a sense of meditation in which we can explore these characters. The film lacks quiet moments as well as exciting ones.


I can at least complement the cinematography as it’s perfectly fine. There’s nothing within its imagery that we haven’t seen before but there is nothing that seems displeasing on a visual level either. I will say though, whether this is an issue with visuals or general structure, that the movie does a terrible job of conveying any sense of time. Were it not for the characters explicitly stating how long they had been stranded for I certainly couldn’t have told you or even guessed. There’s no sense of presence to their environment, no prevalent sense of danger than makes me feel more involved in the movie. I never feared for the lives of these characters and nor did I sense the weight of the obstacle they had to overcome.


My only guess is that the movie assumed the audience would be more invested in the romantic side of the story rather than the survival aspects. The problem however is that said aspect seems even more poorly developed. The movie never establishes a sense of connection between Elba and Winslet and so it’s not only difficult to become invested in their relationship but it feels outright unbelievable. Then you have the way in which their relationship develops as it’s the most melodramatic, cliché ridden spectacle you could hope to see. It really does feel like a check list of every generic trope you could find in an on screen romance with no nuance or subtlety to how it unfolds. I really don’t know who would rush out to see ‘The Mountain Between Us’. If you’re a fan of Elba and Winslet then there are numerous places in which you can find a much better display of their talent. If you’re looking for a survival story or a romance, then it will almost certainly disappoint on that front as well.


Melodramatic but also frustratingly bland, ‘The Mountain Between Us’ fails to deliver on any of the aspects it promises.