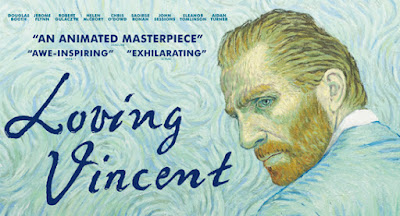 "Great artists are not peaceful souls."

Animation does open up a wide window of potential for filmmakers. I understand that sort of goes without saying but despite knowing that animation has the potential to be artistically driven even at its most basic level, there are still films that blow me away with their visual style and premise alone. The idea of a fully painted feature film is mind bogglingly ambitious, and what better subject can you find for such an experiment than a film about Vincent Van Gogh.


Mystery surrounds the death of famed painter Vincent van Gogh in 1890 France. One year after Van Gogh’s death, a postman requests that his son Armand (Douglas Booth) personally eliver Vincent’s last letter to his brother Theo, leading him on a journey through the late painter’s life and legacy.


It’s easy to be caught up purely in the visuals of a movie like ‘Loving Vincent’ because it really is a sight to behold. It’s not just the beauty of each separate image, it’s the way those images flow into one another. Each shot feels like a living, breathing entity as it moves with such grace and versatility. It’s high praise to say that a movie could visually be likened to a Van Gogh painting, and had they been unable to do that then it’s safe to say that the visual side of the movie simply would not work. But directors Dorota Kobiela and Hugh Welchman more the succeeded in creating a film that evokes its subject on a visual level as well as being endlessly fascinating in its own right.


However, there is a downside to this animation. It’s definitely more expressionistic than realistic, which is fine on some regards given that Van Gogh’s work was of a similar nature. But here’s the thing, Van Gogh was creating a single image that could convey any broad theme, not a structured story. The animation is almost enclosing and weirdly claustrophobic in how it limits the viewer to observing one subject at a time. It’s difficult to become invested in this story or environment when it only ever feels like we’re being placed in one microcosm of it at a time.


I also have to ask myself, beyond its technical prowess would this be a compelling film, and sadly the answer to that is a resounding no. I hate to say it given that the movie is so visually stunning, but as a compelling drama ‘Loving Vincent’ fails to work. It’s a movie that doesn’t show nearly as much innovation on a written level as it did technically. If anything the animation feels like style substituting for a lack of substance or an idea that was conceived long before the actual story was ever formed. 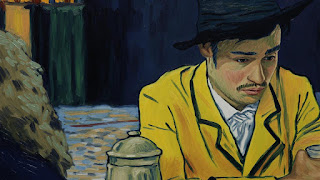 But what precisely is wrong with the story? Well first and foremost I would say it is extremely repetitive. The protagonists journey into Van Gogh’s is interesting at first but as he moves from one subject to another it starts to become apparent that each segment is there to fill time rather than lend anything genuinely worthwhile to the story. We hear about various opinions regarding Van Gogh but rarely seem to get an insight into how he affected their lives or what his internal struggles were. There are a few scenes that hold more intrigue and that actually manage to dig into its subject but for the most part ‘Loving Vincent’ seems aimless.


But as well as not gaining an insight into Van Gogh’s own psyche, the same goes for almost all of the other characters. Armand is very much a vehicle to take us through this odyssey and we don’t get any detailed view of him by the end of the movie. Even his process of uncovering the mystery behind Van Gogh’s suicide becomes boring and stale. He questions someone, speculates on how their relationship with Van Gogh could have led to him committing suicide, they rebuff his theory, we move on. There’s never any dramatic intrigue to the plot, never any interesting studies of the characters that appear in it. It’s a very standard historical drama that doesn’t shed any new light on its subject for anyone that is familiar with it.


It’s hard to judge the performances since the animation doesn’t allow for any physical nuance to be captured. In fact it’s hard to tell which parts of the actors changing expressions are down to the art style and which is the actual performer. But as best I can tell, they were fine all round. None of them felt involving enough to make me believe I was actually watching a fully formed character but their reading of the dialogue was good enough for me to appreciate their accounts. It doesn’t help that virtually every actor’s job within the movie is to recite a monologue about Van Gogh and describe some kind of encounter they had before leaving the story.


Putting its truly stunning animation aside, there’s little intrigue to be found in ‘Loving Vincent’.