"What happens to us after we die? The only way to find out is to see for ourselves."

What is the code of conduct when it comes to a remake of a movie with a good concept? The thing is that I sometimes praise a movie for, if nothing else, at least having an interesting concept that might not have been executed in the right way. But when it comes to ‘Flatliners’ it’s interesting concept is one that it borrowed from another movie anyway. So when you strip that away what can you give this film credit for? The answer is very little.


Five medical students embark on a daring and dangerous experiment to gain insight into the mystery of what lies beyond the confines of life. The bold adventure begins when they trigger near-death experiences by stopping their hearts for short periods of time. As their trials become more perilous, each must confront the sins from their past while facing the paranormal consequences of journeying to the other side.


I try to be optimistic when it comes to certain movies, particularly if they feature a cast of whom I’m a big fan of. ‘Flatliners’ has talent like Ellen Page, Diego Luna and James Norton but they all go to waste in a movie that feels as dull and as bland as any straight to DVD release you’ll find sitting on shelves. It takes a brilliant concept and does absolutely nothing with it. It takes a talented cast and gives them absolutely nothing to do. The only thing it does do successfully is bore anyone who watches it to death.


The 1990 ‘Flatliners’ is far from a good movie but it’s at least an enjoyable one. It’s campy in just the right way to be entertaining, well put it this way; it was directed by a pre-Batman Joel Schumacher. This 2017 version suffers from the issue of assuming that to make something better means to make it more serious and I’m not saying that either approach is inherently better, but when your big vision boils down to turning off some of the studio lights in the hopes of making the movie look “dark and gritty” then you’re in trouble.


The biggest problem is that of tone, and namely how there isn’t one. The movie never manages to conjure up a sense of, well, anything. There’s no sense of horror, wonder, suspense or any kind of discernible emotion that might draw you into this story. It just stumbles through each narrative point and tries to tell the audience how they should be feeling about it as the characters present one banal monologue after another that feels like it was lifted from a starter class as a community college philosophy lecture. There’s never any reason to feel invested in the plot on an atmospheric level. 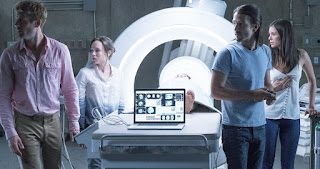 The same can be said of the characters, who remain as vague and undefined as possible. As I said at the start these are all highly capable actors who can clearly handle dramatically charged characters. But the script treats them as props to this story, there just to move the plot along and to tell the audience what is happening. Each of them has an ounce of a compelling backstory but much like the concept of the film it’s never explored upon or addressed in any meaningful way. None of their characteristics feel essential to how they act throughout the movie and as a result the whole affair just feels flat and disinterested. It’s only near the end in which Page’s character looks like she might have some semblance of an arc as the movie finally seems to be focussing in on something. But by then it’s too late for any contrived catharsis to feel resonant.


At the end of the day, ‘Flatliners’ just feels like a movie that is trying way too hard to be too many things. It wants to be a high concept sci-fi drama but then it delves into the most blatant of horror movie clichés, in particular with its use of jump scares. Just when I was thinking that mainstream horror might finally have moved past this overreliance on contrived jump scares a movie like this comes along which not only fails to make any of these moments feel even remotely surprising, but uses the most obvious of tricks to make us feel like what we’re seeing is more important and more terrifying than it really is. Ramping up the soundtrack, quick edits and a snapshot of violence that manipulates you into thinking you’ve witnessed something horrifying but has actually rendered the entire scene redundant. There’s no suspense left to draw out, no surprises left to be had, just a tired and boring parade of nothingness.


All of this is without addressing the fact that the film seems to treat itself as some mind bending drama but it’s ultimately about a group of people who are resuscitated and then haunted by ghosts. It insists upon its own seriousness so much that when the plot starts to escalate it starts to come across as more ridiculous than frightening. I’d say it’ll generate a few laughs in how it plays out but the simple truth is that ‘Flatliners’ is too boring even for that. It’s just a generic, badly executed, mess of a movie.


At its best ‘Flatliners’ is never as interesting as its core concept, at its worst it’s every horror movie cliché you’ve ever seen.