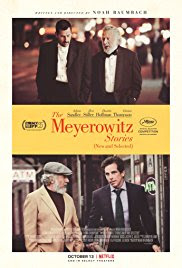 "I didn't make it a month of college, because I liked drugs so much."


The first act of ‘The Meyerowitz Stories’ feels like it was lifted straight from Woody Allen’s best era of filmmaking. This isn’t surprising given that Baumbach seems to have held Allen’s work as a major inspiration for his entire career. He expertly weaves in themes of identity and heritage through a terrific blend of comedy and drama. All of this is still present as the film ploughs on but what changes is the movie’s outlook. As its characters develop so does the movie’s attitude towards its subjects and in doing so Baumbach turns the story into one that feels utterly unique to his own filmmaking style. It starts in a place of familiarity but soon delves into unexplored, sometimes uncomfortable, territory.


But first and foremost I have to praise the cast as they are terrific all round. Ben Stiller gives a performance that, despite not being too far outside his comfort zone, is very well done. He effortlessly conveys the distinct characteristics of Matt and makes his presence within the family dynamic seem notable when he both is and isn’t present. Elizabeth Marvel brings a dethatched quality to her role that makes her isolation issues and inner worries noticeable without ever having to say a word. Sandler is fantastic here as well, channelling some of that off kilter aggression he played so brilliantly in ‘Punch Drunk Love’ but arguably injecting it with more nuance as Danny is clearly a character with layered troubles and issues that go beyond his ever present limp.


I also have to praise Dustin Hoffman given that a large part of what helps ‘The Meyerowitz’ stories feel more comedic when it could be outright tragic is his own comedic ability. Hoffman plays Harold as a determined, stubborn and strong willed artist, but somehow rarely seems unpleasant because of it. His charm and grace never fail to make us laugh at his antics rather than be aggravated. But it’s written in such a way that when the siblings relate how is determination left a noticeable mark on their lives we end up sympathising with both sides of the argument. 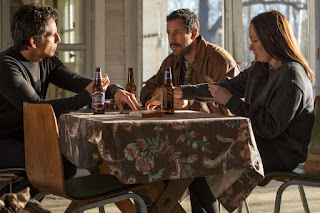 What is so brilliant about the writing is how each of those issues are made to feel unique. The trauma each sibling carries is tied into their identity and so their entire persona feels so fully defined and fleshed out. They all react to the situations the narrative presents them with in different ways and it’s within those differences that a good amount of the comedy comes from. In fact I could also praise the cast for having such deft comedic timing as, much like the script, they are able to switch seamlessly from deep drama to farcical comedy.


This whole story of siblings reuniting and settling their issues concerning their eccentric father may sound eerily similar to Wes Anderson’s ‘The Royal Tenebaums’ (a comparison made more prevalent by the fact that both movies feature Ben Stiller, whose dynamic to the other characters in each movie even feels somewhat similar). But Baumbach’s film sets itself apart by being both hilariously and painstakingly real. It lacks the eccentric flourishes and joyful melancholia of Anderson’s movie but it draws both its drama and its humour out of feeling grounded. When Danny and Matt come to blows it feels almost awkward to watch these grown men uncomfortably wrestle one another. Then when Stiller has to break down in the middle of a speech, Baumbach keeps the camera focussed squarely on him for an amount of time that feels funny at first but eventually uncomfortable. We don’t cut to reaction shots or snarky statements, we just watch a man and his inner pain as it finally manifests itself. So while it does feel somewhat familiar in certain regards, ‘The Meyerwitz Stories’ does enough to distinguish itself as not only a fine study of several characters, but a brilliant meditation on a fractured family unit.


With a cast and script that are perfectly in tune with one another, Baumbach brings another great mix of comedy and tragedy like no one else can.