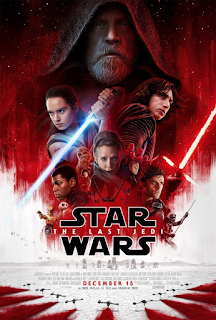 Once again I find myself eager to talk about the trailer for an upcoming ‘Star Wars’ movie but being even more impressed with the poster. That’s not to say the trailer is bad, it is in fact amazing, but that poster truly is a work of art. The striking design and colour scheme is not only magnificent on its own but it stands in such stark contrast to every other ‘Star Wars’ poster before. Many of them use a similar visual style but this one really stands out from the crowd. Here’s hoping the movie it’s advertising is reflective of that, speaking of which;


While this trailer does allude to a lot of potential twists or revelations, I wouldn’t say it gave anything away. There’s definitely a sense of conflicting loyalties throughout the trailer, two separate entities in the form of Luke and Snoke duelling for the fate of their apprentices. There’s an immediate comparison in how they each use similar descriptions to emphasise the power of Rey and Kylo. Whereas Snoke seems to revel in the potential, Luke seems terrified by it. I’m very much looking forward to seeing Hamill’s performance as his few shots in the trailer convey such a sense of fear at the power in front of him.


There is endless speculation on where their identities will fall by the end of this movie. Regardless of what the final result is, it’s a bold move by Rian Johnson to cast doubt over the hero and villain whom were so acutely and firmly established in their roles in ‘The Force Awakens’. Kylo Ren killed one of the most beloved characters in the franchise and carried a villainous presence with him for the whole movie, Rey’s entire arc was purpose built to draw empathy and surprise towards her character. Now we’re faced with the idea of that all being cast into doubt. 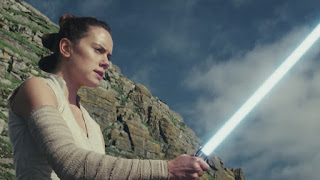 While it’s very fair to think that the last scene could be a possible red herring for the trailer, as in editing two pieces of footage together as if they’re the same scene, I think even if these two shots are not from the same scene then they are very close together. There’s a clear orange glow illuminating Rey’s face and then for the reverse shot to Kylo he’s stood in front of that same orange glow. At least it’s better than the ‘Justice League’ trailer which has a shot of Wonder Woman saying something only for Batman to answer it in what is so clearly a completely different location that it’s infuriating they would think anyone could believe it was.


But I digress, while Rey and Kylo seem to be the central conflict of this trailer there is definitely a lot to be said about where the other major players are during all of this. Finn seems to be confronting his own demons as he duels with Captain Phasma (whose inclusion here absolutely isn’t a reaction to a common complaint about her character on the internet….I’m sure) which should add to his character and get me excited for John Boyega to further stretch his acting chops. Hopefully Poe Dameron also has a larger role to play here as well, both within the plot and in the group dynamic as he felt a little underutilised in ‘The Force Awakens’ despite still being great. Look, I just want some more Oscar Isaac in my life, is that too much to ask? 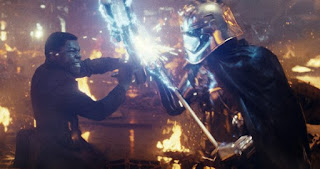 Let’s talk about the cinematography though because I feel confident in saying that ‘The Last Jedi’ could be the best shot ‘Star Wars’ movie so far if we’re to go from the trailer. The camera movement just feels so dynamic and every shot has such a depth of feel. The DP has accompanied Johnson on all of his films so far and I feel like that familiarity is what allows both of them to reach their full potential on this kind of scale. Their visual style complements one another and now they have all the resources in the galaxy to achieve what they want.


So in short, am I excited for ‘The Last Jedi’? Obviously. This trailer not only reaffirms my confidence in how well-crafted the movie will be, but also reassures me that Johnson and his team are not pulling any punches in where they are taking the characters. They want to shock us, they want to bring us something special. Given that this is the second instalment of the trilogy it will inevitably be compared to ‘The Empire Strikes Back’ so they need to pull out all the stops to make it worthy of such a comparison.
Posted by Joshua Price at 12:00